Zinc is a chemical element with an atomic number 30 and symbol Zn. It has 30 protons and 30 electrons and 34 neutrons in the most abundant isotope. In the periodic table, zinc is the first element of the group twelve. In non-scientific terms, zinc is known as “spelter”. 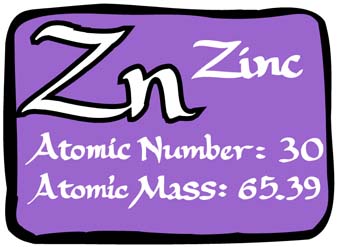 Zinc has been in use by humans since ancient times. It was used to make brass alloy together with copper. Zinc was discovered even before its formal discovery. The German chemist Andreas Marggraf was the first scientist to isolate the pure zinc metal by heating carbon and calamine, in 1746. The metal zinc was first produced in India in 12th century. However, Europe discovered about the metal by the end of 16th century.

The name zinc was discovered by a German alchemist named Paracelsus. It comes from the German word “Zinn” meaning “tin”.

The melting and boiling point of zinc is relatively low for a metal. The boiling point is 1,664.6 °F (907 °C) and the melting point of zinc is 787.1 °F (419.5 °C). Zinc is a fair conductor of electricity. Zinc reacts with carbon dioxide and form a thin layer of zinc carbonate when left in open air. This layer of zinc carbonate acts as a shield for the metal and prevents it from the further reaction. Pure zinc does not react with oxygen. However, it dissolves in most acids and some alkalis. The distinctive attribute for which zinc is known for is its ability resist corrosion hence protects other metals.

Where is zinc found?

It is hard to find zinc in its pure form. However; zinc is found in minerals in the Earth’s crust. It is found in air and oceans in small traces.

Sphalerite, Wurtzite, Hemimorphite and Smithsonite are the minerals that are mined for zinc. The major production of zinc is mined in Australia, China and Peru.

Usage and advantages of zinc compounds:

For humans and animals zinc is a significant nutritional material. It is the second most familiar metal trace found in our body, the first one is iron. An average adult body contains almost 2 to 4 grams of zinc. Human body requires zinc to help build DNA and found in over hundred enzymes. It also helps our body to protect against harmful viruses and bacteria. Zinc is an essential mineral for the growth of human body, hence an important intake for children and women in pregnancy. Zinc is also essential for brain and helps in learning. Zinc carbonate was also found in the pills used to treat sore eyes. It is also used in baby powder and tooth paste. Deficiency of zinc can result in many diseases.

Almost half of the zinc today is used for vitalizing other metals like steel and iron. These metals are coated with a thin layer of zinc in order to protect them from rusting and corrosion. Another usage of zinc is in making alloys with other metals for example; brass is an alloy of copper and zinc that is in use since ancient times. Other than brass, cadmium zinc telluride, nickel silver and zinc aluminium are also the alloys of zinc.

Human body requires the intake of zinc to develop and grow properly. The food those are good source of zinc are lean meat such as liver, seafood like lobster and oyster, lamb, beef. Another good source of zinc is almonds, seeds, nuts beans and whole grain if grown in zinc soil.

There are five stable isotopes of naturally occurring zinc. 64Zn,66Zn, 67Zn, 68Zn, and 70Zn are zinc isotopes. 64Zn is the most abundant (48.6% natural abundance) isotope in the Earth’s crust.