The zebra is in the same Equus family member as the horse and donkey and they are most notable for their brilliant white and black (or brown) patterned coats. 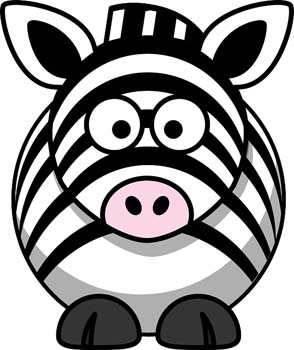 There are a number of species of zebras and each one has a unique striping pattern. The Grevy’s zebra stripes are very thin, there are vertical stripes on the torso and neck of the mountain zebra and yet its haunches have horizontal stripes. Certain plains zebra subspecies have what are called brown ‘shadow stripes’ in between the black and white coloring.

Wolves that are common are the timber wolf and the gray wolf. Grey wolf adults can grow to 120-200 cm (4-6.56 ft. long) with a weight of 18-79 kg (40-175 lbs.) They have thick gray fur but can also have pure black or solid white fur. The red wolf is another common wolf and is slightly smaller. Other types of wolves include the Great Lakes wolf, also known as the Eastern wolf, the Eastern timber wolf, the deer wolf, and the Algonquin wolf.

Scientists feel that the striping of the zebra acts as a camouflage, making it difficult to pick one animal out when they are all standing together. There may be an additional advantage as the coloring may look unattractive to disease carrying insects. 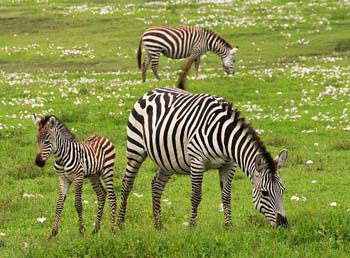 The plains and mountain zebras live in groups that are called ‘herds’, with one solitary male called a stallion and many females, called ‘mares’ that are grouped together in a ‘harem’. Grevy’s zebras do not live in herds but instead each of the stallions has preset territories. The mares will cross into the territories for breeding and to have their babies, which are called ‘foals’. When the foals are old enough, the females will leave the area.

Zebras communicate with each other in many ways: facial expressions that can include teeth that are bared or wide opened eyes as well as vocal barking and braying. They also have signals that include snorting or huffing and the method that they position their ears can convey trouble or convey feelings.