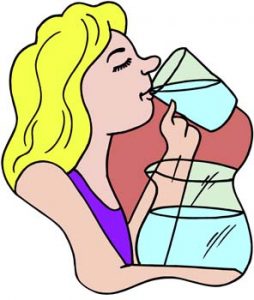 We already know water is essential to all living things. In fact, it’s so important that our Earth is covered in 70 percent of this liquid. Plus, our own blood is made up of 83 percent water.

Pure water has no smell or taste and contains only two elements; hydrogen and oxygen (better known as H2O). But did you know, even though our planet is covered in water only about 1 percent of it is drinkable? Or that the water we use today from our faucets could contain molecules of water that the dinosaurs once drank? Read on to discover more weird, wacky and wonderful water facts.

Where In the World is All this Water?

Most of Earth’s water is found in the three largest oceans. These are the Pacific Ocean (the largest), the Atlantic Ocean and the Indian Ocean (the smallest).

The Pacific alone covers around 30 percent of our planet and has the deepest point known to man. The Mariana Trench sinks below the surface to a depth of 11,000 meters (36,000 feet)!

The second largest ocean is the Atlantic, which covers about 21 percent of Earth’s surface. It derives its name from “Atlas” of Greek mythology and is also home to the Bermuda Triangle (which is believed to have “taken” many ships and air planes).

The third largest ocean is the Indian Ocean. It covers around 14 percent of our planet’s surface.

Freaky Factoid: If you could fill a cube with just the water from the oceans, that cube would have to be 1,000 meters (621 miles) in length. 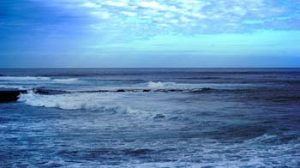 The Waterways of the World

Not only does Earth contain many salty seas and oceans, it also has some really long waterways. Check this out…

Freaky Factoid: Up to 30 percent of all fresh water can be found underground.

Did you know water can appear in three very different forms? It can be a liquid, a solid or a gas.

In fact, our planet has what is known as a ‘Water Cycle.’ This is how Earth keeps replenishing its water supply. Here’s how it works;

Liquid water evaporates into a gas (steam or vapor) and is sucked into the sky.
This gas cools and condenses into drops of liquid or ice crystals. It then turns into clouds.

When the conditions are right, this water will return to Earth as rain, hail or even snow.

Freaky Factoid: There is more fresh water in our atmosphere than in all the rivers of the world.

What We Do With Water

Since the dawn of time, plants, animals, marine life and humans have depended on water to live. It grows our food, cools us when we are hot and quenches us when we are thirsty. But did you know water is also used for many other everyday things?

Water is used for;

Take a moment to think about all the places and things you use water for each day.

Freaky Factoid: In the US alone, 5.7 billion gallons (21 billion liters) of water is flushed down the toilet each day.

We haven’t washed out of water fun just yet. Here are some more wacky and weird water facts you can wash over your friends and family with.