Venus is a rather fascinating planet. It’s very similar in size to Earth, but very different in lots of other ways. 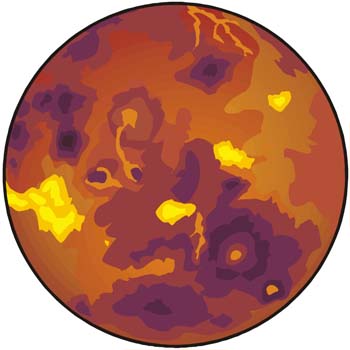 What you need to know about Venus

The clouds are so thick that hardly any light reaches the surface. The light that does make its way down to the surface is turned into heat and can’t escape the atmosphere. So what does this do? Well this makes Venus the hottest planet at around 500⁰C. Now that is one seriously hot planet, if we went there we’d fry for sure! Think about it like this. On a warm summer’s day in London, the temperatures would be about 26°C. That’s almost 20 times hotter!

Did you know the Earth has a sister? Well it’s none other than Venus, and that’s because they are so similar in size, gravity and density. Basically it is made up of almost exactly the same things that Earth is made of like volcanoes, mountains and sand. Interesting huh? So we’ve got a sister!

Wow this is pretty cool! If you had to somehow find a way to live on Venus, unlikely as it is, you’ll notice something really strange about the days. Venus rotates so slowly it’s like a snail, and a day on Venus is like 100 Earth days! No way, that would mean one seriously long school year.

Venus also rotates in the opposite direction as almost all the other planets. So instead of the sun rising in the east and setting in the west, the sun on Venus rises in the west and sets in the east. How weird is that?

Venus is one super interesting planet, and now go forth and share your knowledge!