Uranium is a chemical element with the atomic number 92 in the periodic table. It is represented by symbol U. Uranium is a silvery white metal, found in the row seven of the periodic table in the actinide series. Among the naturally occurring elements uranium is the heaviest element. A uranium atom has 92 electrons with 6 valence electrons and 92 protons. 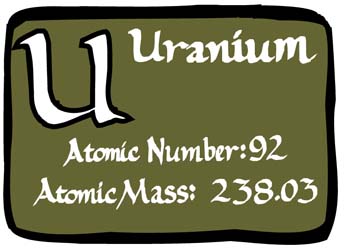 Uranium is named after the planet uranus. It was discovered and identified in 1789 by a German chemist, Marin H. Klaproth. He isolated an oxide of uranium while experimenting with the pitchblende samples.

Uranium is a hard silvery white metal under standard conditions. It is strongly electropositive and weakly radioactive. Uranium reacts with non-metallic elements to make compounds. Uranium in pure form is malleable and ductile. It is a poor conductor of electricity. Uranium is softer than steel but harder than many other elements. It has a very high density. Alpha, beta and gamma are the three crystallographic modifications of the metal uranium. Uranium 235 is the only fissile (that can sustain a chain reaction of nuclear fission) naturally occurring isotope. Uranium has a melting point of 3,818 degrees Celsius (about 6,904 degrees Fahrenheit).

Uranium metal is dissolved by hydrochloric and nitric acids. It reacts slowly with non-oxidizing acids while alkalis do not affect uranium metal. It reacts with almost every non-metallic element to make compound. As the temperature increases the reactivity of metal uranium also increases. Uranium can also react with cold water when it is pyrophoric that means when it is finely divided.

Uranium and compounds of uranium can be harmful both chemically and radiologically due to their toxic effects. Uranium in pyrophoric form (finely divided form) can make a fire hazard.

Uranium ranks 50th among the most abundant elements in earths natural crust. The low concentration of naturally occurring uranium exists in soil, rock and water. In the Earth’s crust, Uranium is found naturally in numerous minerals such as Torbernite, Pitchblende, Carnotite,Autunite and Uranophane. It is also found in lignite, monazite sands and phosphate rocks.

Uranium is being used by people for millennia. In ancient times, Uranium was used as a coloring agent in glass and ceramic glazes. Today, Uranium is used by nuclear power plants as a source of fuel. Uranium is known for its unique nuclear properties. Nuclear power plants use uranium to cause a controlled fission chain reaction to generate power. This reaction helps to generate a huge amount of power from a small amount of uranium. One kg of uranium can produce energy equal to the energy produced by 1500 tons of coal.

Another important use of uranium is in military weapons. Depleted uranium (DU) is used in projectiles and bullets to make them hard and effective. It is also used on tanks and armoured vehicles to make them more protective and safe from the enemy’s attack.

Beside weapons and nuclear power uranium is used in inertial guidance devices such as ballast for missile reentry vehicles, in gyro compasses, as a shielding material and counterweights for aircraft control surfaces.

Uranium metal is also used for the production of high energy x rays. It was also used as photographic toner.

Naturally occurring uranium metal has 3 major isotopes, 235U (0.71 percent) , 238U (99.28 percent abundance) and 234U (0.0054 percent). The isotopes of uranium are radioactive. 235U is the only naturally occurring fissile isotope while 238U is the most stable isotope of uranium metal which makes up to 99% of the naturally occurring uranium. 233U is another fissile isotope that can be produced by natural thorium. This isotope is also important in nuclear technology. 233U is important because it has a higher fission cross-section than other uranium isotopes for the slow neutrons.