Have you heard about the great big rock that literally pops out of the ground in Australia? Well it’s quite an awesome thing to see that’s for sure. It actually officially has two names, so for this we’ll use Uluru, to make it a bit simpler. Uluru is the Aboriginal name given to the rock, and Ayers Rock is rooted in people exploring the area for the first time. Gather together gang and let’s go and explore this beauty of nature. 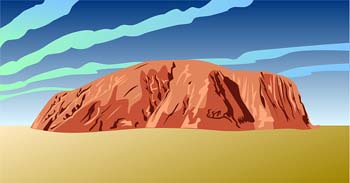 It is a massive sandstone rock that is about 450km away from the town of Alice Springs, which is right slap bang in the middle of the Australian Outback.
What you need to know about Uluru?

The rock is made of sandstone and it can change colour during the day, depending on how that great big sun is shining down on it. Sometimes it looks brown, but at dawn and dusk an amazing sight awaits you as it turns to red. That would certainly be awesome to see.

The huge sandstone rock is 342m high and can be seen from far, far away. That’s as high as the Empire State Building! Wow! It measures almost 10km all the way around it. You could run a marathon, just make sure you’re fit and can handle the heat! 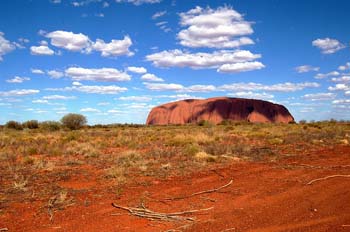 Some History on Uluru

This rock is a holy place for the Anangu tribe of Aboriginal people. They’ve been living in the area for around 10,000 years.

The first foreign people to see Uluru were explorers. The boss was English born Australian William Christie Gosse. They first set eyes on Uluru on 19 July 1873. They must have been quite taken aback at the sight! They decided to call it Ayers Rock after Sir Henry Ayers, the Chief Secretary of South Australia at the time.

Scientists think that this awesome beauty is about 600 million years old! Wow, it’s certainly been around for some time. But way back when, it would have been at the bottom of the sea but now we know that it popped out as a massive rock.

Have you ever heard of an inselberg? Well it actually means Island Mountain, and that’s exactly what Uluru is. It is a very noticeable lone bump or hill that rises quickly from flat plains in hot and dry regions. It’s the hard rock of a mountain left over after softer areas have eroded away.

The rock has eroded valleys and ridges but very little vegetation. Those plants out there in the desert are super strong. But around Uluru, there are a number of springs, waterholes, rock caves, and ancient paintings. Now that would be a great adventure to go exploring around Uluru. 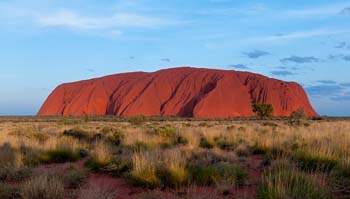 We spoke about the awesome red colours that you can sometimes see when the sun is just in the right place. This is because of surface oxidation of its iron content; otherwise the formation would look greyer. But what exactly is surface oxidation. Think of it this way. A cut apple turns brown when cut, a bike can rust and a copper penny can turn green. All these things are from a process called oxidation. Oxidation is the interaction between oxygen molecules and all the different substances they may contact, from metal to living tissue.

Uluru was originally listed on the natural World Heritage site in 1987 due to its uniqueness. In 1997, it was also put on the World Heritage site list as a cultural site due to its importance to the local Aborigines. The rock is one of the few places in the world to have two listings. It’s clearly one special rock!

Amazingly, there is another rock formation in the area, which is pretty special too. There is Kata Tjuta, also known as Mount Olga and it’s a group of 36 large dome shaped rocks. They were originally one big rock formation. They are found 25km west of Uluru in the Northern Territory. The tallest of which is 546m. Uluru and Kata Tjuta are two major landmarks within the Uluru-Kata Tjuta National Park.

This is interesting! Most of the rock sits underground but no one seems to know how deep they go. Don’t think a small spade is going to do the job of finding out this mystery.

If you decided to climb this massive beauty, you could run into a bit of trouble. Most of the sides go almost straight up. Getting a helicopter might get you there instead. The top is flat.

Uluru has loads of crevices, caves and valleys.

Uluru, or Ayers Rock would be one awesome place to visit. Perhaps you can beg your folks to go on holiday there, okay don’t beg, ask nicely, or you’ll be the superstar in your next test!