Interesting Facts for Kids about Tsunamis

Have you ever heard about a tsunami or seen something on TV about them?

Well, they are a mighty force to be dealt with, and they can be deadly.

Here we take a look at everything you need to know about these enormous walls of water so you can be the cool expert on tsunamis in your next test. 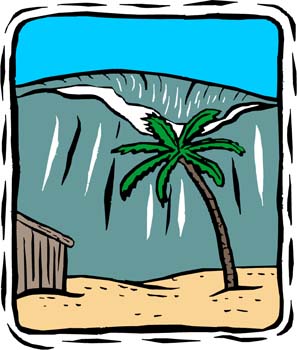 They are massive, crashing waves that head towards the shore.

As they do so, they keep growing in size and get bigger and bigger along the way.

It must be frightening to see that coming your way.

As we said, they can cause heaps of harm as they charge onto land, flood cities, and destroy homes.

They are not just one big massive wave, but a whole series of waves called a ‘wave train.’ 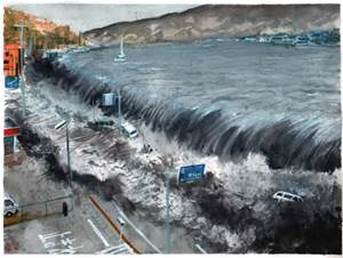 What causes a Tsunami?

Tsunamis are caused by a significant shift in water.

Have you ever moved forward in the bath quite fast?

It causes a pretty big wave.

Bet your Mum’s not happy when she sees the mess!

It’s the same type of thing in the ocean.

When a large amount of water is moved suddenly, a massive wave is formed.

They can be caused by a movement that comes from earthquakes, landslides, volcanic eruptions, glaciers breaking off as well as meteorites.

These all create a lot of movement.

Most tsunamis however are caused by earthquakes. When there’s an earthquake a large area of the Earth’s crust moves suddenly.

When this happens underwater, you get big gaps that can appear on the ocean floor. Water then rushes in to fill the gap, and a tsunami is on its way to forming. 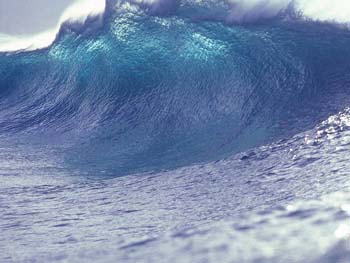 What happens during a Tsunami?

Once the water is moved by an earthquake or something else, large waves like ripples spread out from where the water was first moved from.

These waves can move quickly and for seriously long distances. Some tsunamis have traveled for thousands of kilometers across the ocean.

They can even travel at speeds of up to 804km per hour! No way, no wonder they cause so much destruction. That is pretty much the same speed as a jumbo jet!

As the waves travel through the deep parts of the ocean, the top of them is quite short.

This makes it difficult to see if a tsunami is coming as you might not be able to see them in the deep ocean.

But, the closer they come to land and shallow waters, those waves certainly get humongous, all piling up on top of each other.

Sometimes tsunamis like to trick us. As they reach the coastline, a trough of the wave can be seen.

What this does is causes the water to move back down the shoreline, and it can be quite some distance.

The reason this is not cool, is that people think it’s disappearing and head out into the open area.

As the waves arrive on the shore they are a very tall wall of water.

They rush inland at huge speeds and with a great deal of muscle behind them.
They can rush inland for long distances. S

ome tsunamis have been known to reach heights of nearly 31m. That certainly would have you shaking at just the site of it!

Sometimes, just when you think it’s over, more waves may arrive. This can be anything up to a couple of minutes.

Where do Tsunamis Happen?

Tsunamis can happen in any significant body of water but are most common in the Pacific Ocean, where there are loads of underwater earthquakes and volcanoes.

Countries with long coastlines on the Pacific Ocean, such as Japan, Chile, and the United States, are all at risk of being hit by a tsunami.

But, they can happen anywhere!

In 2004 a massive earthquake in the Indian Ocean caused a destructive tsunami, which killed over 230,000 people. That is frightening! 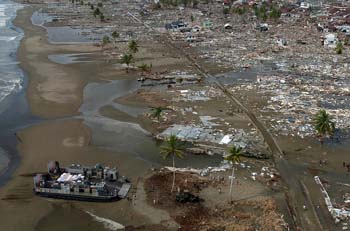 If they know an earthquake has happened that might cause a tsunami, people are issued warnings to leave the area or find higher ground. Lucky for that!

So, there you have it, everything you need to know about tsunamis.

Hope you enjoyed our interesting facts and they can help you out with your schoolwork.