A tornado is a tube of spinning air that is touching the clouds and the ground at the same time. When this happens, the air begins to spin because the warm air is trapped under cold air.

When the two types of air combine the air ‘sweats’, or begins to form more water vapor. The water vapor and the spinning air makes the funnel cloud we call a tornado.

Tornadoes are sometimes called twisters because the funnel cloud twists and turns. 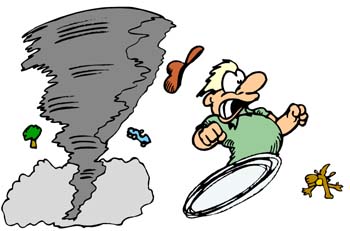 Are all tornadoes alike

The Fujita Scale uses the numbers 0 to 5 to measure the strength of a tornado.

How dangerous is a tornado

An F0 tornado is a tornado with winds less than 75 miles per hour. An F0 tornado breaks branches out of trees and blows over things like trash cans and shopping carts.

An F1 tornado has winds of 75 to 110 miles per hour. F1 tornadoes can knock trees down, move things several miles from where they were and even tear the roof off of a house or building.

An F2 tornado has winds of 110 to 135 miles per hour. An F2 tornado can blow roofs off houses, blow windows out of buildings and can move a train off the tracks or destroy trailer houses. An F2 tornado can also uproot trees and pick cars and trucks up and put them down several yards from where they were.

An F3 tornad has winds of 125 to 200 miles per hour. Houses, buildings, trucks and cars are damaged and destroyed in an F3 tornado. Trees can be pulled out of the ground by the force of an F3 tornado’s winds.

An F4 tornado has winds of 200 to 260 miles per hour. F4 tornadoes destroy most everything in in sight of where they hit. Things picked up by and F4 tornado can be blown several hundred miles away.

An F5 tornado has winds of over 260 miles an hour. F5 tornadoes are deadly and destructive. The damage done by an F5 tornado destroys everything in sight by moving things miles from where they were and blowing even metal and concrete buildings down as if they were made of paper. 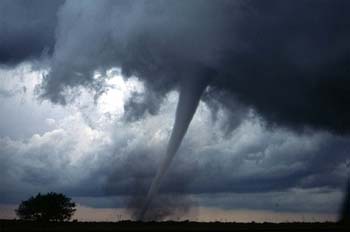 Where do tornadoes happen

A tornado can hit almost anywhere, but the United States has more tornadoes than any other place in the world. Each spring, summer, and fall, there are between 1,200 and1,500 tornadoes in the United States. Most of them are either F1 or F2 tornadoes.

There are even some places in the United States that have more tornadoes than other parts of the country. The area that has the most tornadoes is called Tornado Alley. The states that are part of tornado alley are: 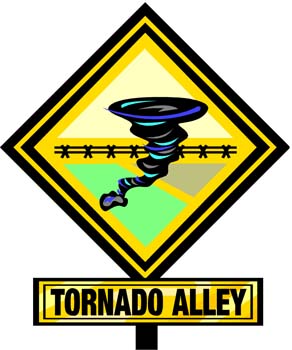 What to do when there is a tornado

Tornadoes are serious business. It is NEVER safe to try to watch a tornado. People are killed by tornadoes every year, so you need to know how to protect yourself from these terrible storms.

When the weather man tells you there is a TORNADO WATCH, it means the weather and air temperatures can easily form a tornado.

When the weather man tells you there is a TORNADO WARNING, it means a tornado is in the area and you should move to a safe place NOW!

If you are in a place where a tornado is at, you should move to a basement, storm shelter or a room in the center of your house (a closet or bathroom).