When looking at the tallest mountains in the United States, all of them are located in Alaska.

If you consider just the continental United States, which is all of the U.S., except Alaska and Hawaii, there is a list of peaks that are the tallest.

Reaching the summit, or top of the mountain, is quite a feat, and one many people strive to achieve.

In order of the tallest peaks in the continental U.S., the follow peaks reign supreme.

Tallest Mountains in the Continental US Fact Sheet: –

Mount Whitney is located in California. As the highest mountain in the continental United States, Mount Whitney is 14,494 feet above sea level. It is a part of the Sierra Mountain chain.

The climate of Mount Whitney is alpine, and few plants and animals are found near the summit. One example is the sky pilot plant, which is a cushion plant that grows very close to the ground.

Mount Elbert, the second-highest peak above sea level in the contiguous United States is 14,433 feet high. This mountain is part of the Colorado Rocky Mountains, which forms a section of the Rocky Mountains. The Rocky Mountain chain extends from Canada to Mexico.

If you look at Mount Elbert, you will see that it is generally capped with snow, even during the summer months. While this mountain is considered a relatively easy climb to get to the summit, weather changes are frequent and can make climbing more difficult. These include afternoon thunderstorms during the summer and snow anytime.

Mount Elbert is named for Samuel Hitt Elbert, who was the governor of the Territory of Colorado between 1873 and 1874. In 1874, the first recorded person climbed Mount Elbert, Henry W. Stuckle.

Mount Massive is very close to Mount Elbert and is also located in Colorado. This mountain is 14,421 feet high, making it the second tallest peak in Colorado and the third tallest in the continental U.S.

While Mount Massive is a part of the Rocky Mountains, it is part of a particular section known as the Sawatch Range. One of the reasons for its name is that it has more area above 14,000 feet than any other mountain in the contiguous United States.

There’s a funny story in Mount Massive’s history. People tried to help it earn the title of the tallest mountain in Colorado by piling rocks at the summit to make it taller than Mount Elbert. People who wanted to help Mount Elbert keep its title would climb Mount Massive and knock the rocks down.

Mount Harvard is another of the mountains in Colorado. The fourth tallest mountain in the lower 48 states and the third highest in Colorado, it is only a little shorter than Mount Massive, at 14,420 feet tall.

Mount Harvard is part of the Rocky Mountains and belongs to a section known as the Collegiate Peaks of the Sawatch Range. It is located within Collegiate Peaks Wilderness in San Isabel National Forest.

Mount Harvard was named for Harvard University, by the first Harvard Mining School class. Other mountains in the area were named after other universities, which is where they got the name the Collegiate Peaks.

Mount Rainier, the fifth tallest mountain in the continental United States, is located in Washington state. It is also called Tahoma or Tacoma and is 14,411 feet tall.

This mountain is also a large and active stratovolcano, a specific type of volcano that generally features steep sides. In addition to the potential danger from the volcano erupting, there is a significant amount of glacial ice that threatens people and homes if Mount Rainier erupts.

Mount Rainier is close to the major Washington city of Seattle. Because it is so close, it is potentially hazardous to over 80,000 people and their homes if the volcano erupted.

Mount Williamson is the sixth tallest mountain in the continental United States and the second tallest in California, after Mount Whitney. It is 14,375 feet tall.

Close to Mount Whitney, Mount Williamson is in the Inyo National Forest. While the two mountains are close, it is harder to access Mount Williamson, so fewer people tend to climb it.

Mount Williamson was named after Lieutenant Robert Stockton Williamson. He conducted one of the Pacific Railroad Surveys, which were explorations for potential pathways of the transcontinental railroad. 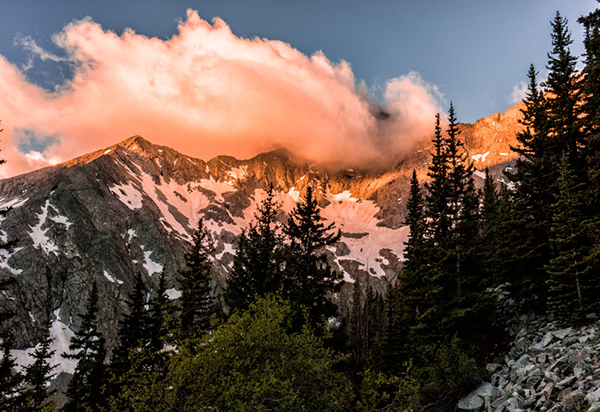 Blanca Peak is another of the tall mountains located within Colorado at 14,345 feet high. A part of the Rocky Mountains, it is situated between the San Isabel National Forest and the Rio Grande National Forest.

Blanca Peak is the highest part of the entire drainage basin of the Rio Grande River. This river is a significant river between the United States and Mexico, extending from Colorado to the Gulf of Mexico.

Blanca Peak is also known as the Sacred Mountain of the East to the Navajo people, a Native American tribe. This peak is also called the Dawn or White Shell Mountain, and it is made up mainly of granite that is 1.8 billion years old.

La Plata Peak, at 14,336 feet tall, is the fifth tallest mountain in Colorado. Like many of the other “fourteeners,” mountains that are over 14,000 feet high, it is part of the Rocky Mountain range.

Within the Rocky Mountains, La Plata Peak is part of the Sawatch Range. The name “la Plata” means “silver” in Spanish. The mountain got its name from numerous silver deposits that are located around the mountain.

There are multiple climbing routes to ascend La Plata Peak. The trailhead is easy to access by taking a paved road, making it an easier trek than some other mountains. 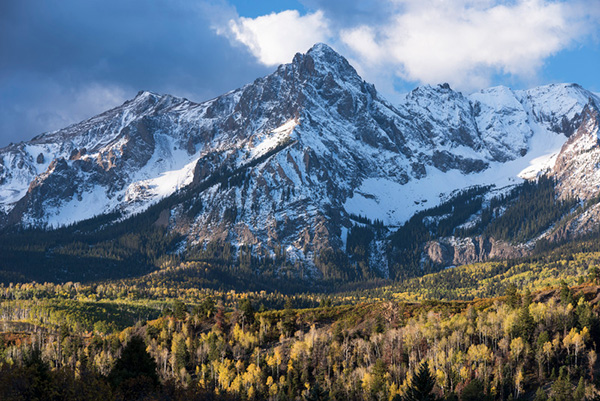 Uncompahgre Peak comes in at 14,321 feet tall, making it the ninth tallest mountain in the continental United States and the sixth-highest summit in Colorado. It is part of the San Juan Mountains, which is a section of the Rocky Mountains.

Uncompahgre Peak was named by the Ute people, a Native American tribe primarily located within the Great Basin, which encompasses areas of Colorado through Utah. The word “Uncompahgre” means “red water spring,” which is related to the hot springs around the mountain.

Similar to other mountains that make up the San Juan Mountains, Uncompahgre Peak exists because of volcanic activity, but it is not a volcano. The mountain is broad, but the north face is a very steep 700-foot cliff, making the summit look like a block.

Crestone Peak is right at 14,300 feet tall, and it is in Colorado and part of the Rocky Mountains. This mountain is part of the Sangre de Cristo Range, just a little smaller than Blanca Peak, which is also in the range.

Other high summits in the Sangre de Cristo Range include Crestone Needle, which is another over-14,000 foot peak, and Kit Carson Peak.

When visitors come to the Rio Grande National Forest, they can explore Crestone Peak and other nearby mountains. This mountain is often classified as a “double black diamond” by climbers.

Did You Know There’s a Reason Why These Peaks Are Close in Size?

You might look at these mountains and wonder about the fact that many of them are quite close in size. After all, Mount Elbert and Mount Massive are so close, and people tried to make Mount Massive taller by carrying rocks to the summit.

While it is a coincidence that many of these peaks are almost the same height, there is a geologic process known as the “glacial buzz saw,” which affects how high mountains can get, limiting the heights of the mountains in the continental United States.