You may have seen a submarine on television or in the movies. This large, powerful underwater vessel is a cool way to explore below the sea. We also depend on them for many things. Read on to discover all about the submarine. We will be exploring the history of the “sub”, what it is used for and much more. So let’s dive right in and discover the world of the submarine. 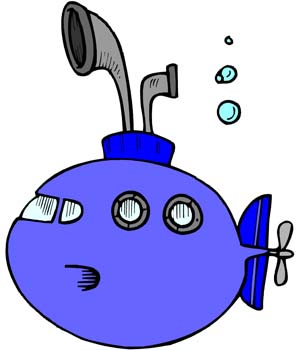 What is a Submarine?

A submarine is a special vessel or ship that can go underwater. Inside is has huge tanks that hold water. These are called, ballasts. The sub comes equipped with a power source. These can be an engine, nuclear power, batteries or a combination of the three. To find its way through the dark oceans, submarines use sonar equipment. This puts out a sound wave. When a sound wave hits an object it bounces back a signal to the submarine. Other equipment inside the submarine provide clean water and air for the crew members.

Ponder This: What is the one submarine that cannot go underwater? Find the answer in More Freaky Factoids.

The History of Submarines

Oddly enough, the first working submarine was actually a leather-covered row boat. An inventor by the name of, Cornelis Drebbel constructed this odd underwater vessel in 1620. It managed to reach depths of 4.5 meters (15 feet).

In 1776 a US inventor (David Bushnell) built a submarine that was used in the American Revolution. Later on in the year 1800 another American inventor (Robert Fulton) built the Nautilus. This submarine was small and was used for attaching explosives to ships.

By the 1900’s, inventors had come up with subs that could run on a battery-powered electric motor (for underwater) and diesel engines (for surface travelling). These submarines were used in both World War I and World War II.

In 1954, the US Navy used the first nuclear-powered submarine. It was named the USS Nautilus.

It’s All About the “Ballasts”

In order for a submarine to stay submerged (underwater) it has special compartments called, ballasts. These huge tanks fill up with water when the sub wants to sink. This is because with more water it becomes heavier and will sink. When the submarine wants to rise, the water in the ballasts is let out. This makes the vessel lighter so it rises. A sub also has a propeller on the back of it. This pushes it at various speeds.

Ponder This:What depths can a submarine dive to? 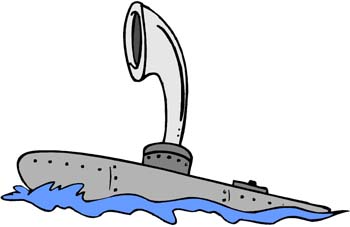 What Are Submarines Used For?

You might be surprised at all the things a submarine is used for. Check out the following list to see which ones you knew.

Military – subs protect the Navy’s ships (aircraft carriers) and carry out other tasks.
Science and Research – subs are helpful for studying the depths of the oceans where divers cannot reach.
Salvage – subs can be used after a ship sinks to recover lost items.
Tourism – some exotic locations offer rides in a submarine.

Ponder This: How many crew members can a nuclear submarine hold?

We haven’t dove past all the fun just yet. Here are the answers to your ponder this questions and more freaky facts. Check it out.

Now that you have learned all these fascinating facts, you can impress your friends and family with your new-found knowledge. Who knows? You might just become known as “Captain Sub.” Just don’t let them think you’re a sandwich…