Statue of Zeus at Olympia Facts

This historic monument may only appear now on coins and in ancient Greek descriptions, but in ancient Greece times it stood tall and magnificent. The Statue of Zeus at Olympia was sculpted by an artist named Phidias. This incredible statue took him 12 years to make; he began sculpting in 430 BC and completed it in 422 BC.

The Temple at Olympia was a shrine to Zeus, the Greek god of the sky, lighting, thunder, law, and order. The Olympic Games also took place here every four years. The statue unfortunately was destroyed by a fire in the 5th Century A.D. Even though it does not exist anymore, it is still known as one of the Seven Wonders of the Ancient World. 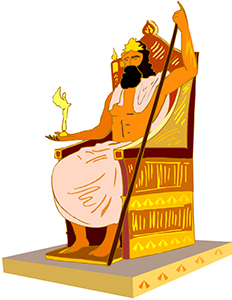 Statue of Zeus at Olympia Facts for Kids 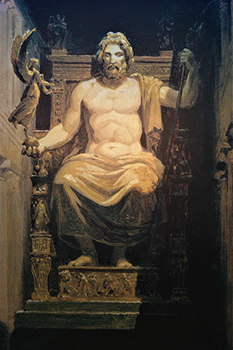 Question: What was Zeus the Greek god of?
Answer: The sky, lighting, thunder, law, and order

Question: How many years did it take Phidias to sculpt the Statue of Zeus at Olympia?
Answer: 12 Years

Question: Does the statue still exist?
Answer: No