Have you ever wondered why some things are easier to spin than others? There are actually several ways to explain the motion of spinning, but they can all be summed up by Newton’s First Law of Motion that says any object in motion will remain in motion and anything that is still (at rest) will stay still until another force interferes with that object. 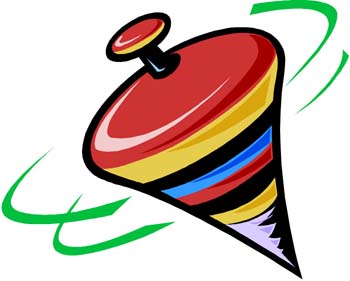 EXAMPLE: If you stand a penny on its edge and begin to spin it, it will keep spinning until a) you knock (force) it to fall or b) the gravity forcing the penny to go around and around decreases to nothing. NOTE: As the gravity decreases the friction between the penny and the air increases and eventually the air is able to put enough force on the penny to knock it down.

How the state matter affects spinning

The state of matter also affects how something spins. Here’s why…

Because of the molecules of a solid work as a team, the solid piece of matter spins or rotates better than a liquid or a gas.

What does this have to do with how things spin?

Since you can’t see inside the egg:

NOTE: Don’t throw the cup—just the water inside it.

Notice this: the entire rock hit the paper (if you didn’t miss, that is). The rock did not break apart through the air. The water, however, did spread out once it left the confinement of the cup. Not all of the water hit the paper because it was trying to take on the shape of space it was in.

If you want to compare how solids, liquids and gases spin, try this: