Spain’s territory covers a vast area of southwestern Europe’s Iberian Peninsula and includes the Canary Islands in the Atlantic and the Balearic Islands in the Mediterranean. Most of the main land areas are high plateaus with the northern areas covering mountain ranges which include the Pyrenees. 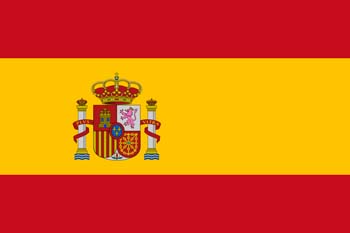 The varying landscape brings many different temperatures from cold winters and hot summers in the plateau to wetter and cooler areas to the north. Spain has had a history that has included being one of the most powerful nations in the world. As experts in ship building, they built an empire that explored, discovered and took over many of the countries and continents. 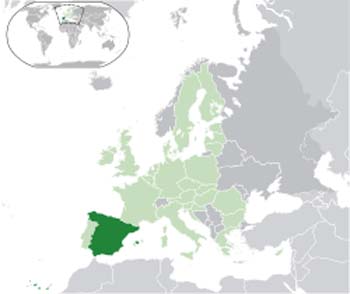 The location of Spain and its access to the seas allowed early waves of all types of people and tribes to settle in the area throughout its history. These included the Libyan and Iberians from the south and then the Celts. The blending of these tribes created a culture called the Celtiberians and they divided their identities and areas into: Asturians, Cantabrians, and Lusitanians.

Due to the wealth of minerals, the Phoenicians were next to arrive to take advantage of the mining. They established many of the coastal trading posts. The next to arrive were the Greeks, who established many of the prospering towns. Their arrival caused a struggle and when the Phoenicians enlisted the aid of the Carthaginians, the later took over all of Spain.

The continued battles allowed the Romans to enter and the conquest of Spain allowed six centuries of Roman rule. The peninsula of Spain became completely ‘Romanized’ and resulted in the success of many of the popular writers as well as two emperors. The Roman influence left Spain with such social elements as Roman law, the language of Latin, the Christian Religion and the municipality.

Following the fall of the Roman Empire, there were many transitions to the area including the invasion by the Visigoths, and the conquering of the southern area by the Arabs. The Muslim influence lasted into the 15th century.

The 1469 marriage of two of the powerful Catholic Monarchs (Isabella of Castile and Ferdinand of Aragon) joined the two kingdoms and opened a period of success and growth for Spain. It was during this time that they built strong and powerful sailing ships and increased trade with other countries. This was also the time that, sponsored by the monarchy, Christopher Columbus sailed to discover America. In search of spices and increased wealth, the Spanish took over many of the islands and territories.

From the 16th to the 17th centuries the Spanish Empire experienced the height of their success, expansion and construction. They became the world’s strongest power on both land and sea. But this time began to diminish with the War of Succession to the Spanish Crown (1701-1714) and destroyed the Habsburg Dynasty, allowing the growth of the Bourbons. During this time, the Treaty of Utrecht bought on British occupation and was the only dispute throughout history between the United Kingdom and Spain.

The Spanish throne was under threat after the invasion by Napoleon Bonaparte and the Spanish people grouped together to restore the Bourbons as the official monarchy in 1873. This occurred right after a short war with the United States which resulted in Spain’s loss of critical territories including Puerto Rico, Cuba and the Philippines. This was the final destruction of the overseas empire of Spain.

1931 brought a time of turmoil as the political uprisings and the lack of popularity of the monarchy came into play. The king was forced to leave the country and on April 14th, the establishment of the Second Republic occurred. It lasted only five years, during which the country experiences economic, social and political conflicts. This divided it into two opposing sides, causing a civil war that lasted for three years.

In 1936, General Franco took over as dictator and this lasted for forty years. The ruling of Franco supported only their own political party. Upon the death of Franco, the door was again open to restore the monarchy with the placement of Juan Carlos I de Borbon y Bordon as king.

The new king instituted many changes including the adoption of a western mode of democracy. The country made many transitions in an attempt for democracy including recognition of basic liberties, various political parties (including the communist party), amnesty for prior political offences and trade unions. By 1978 a new Constitution was ratified.

The strife in some of the other regions, including Catalonia, Galicia, Andalusia and the Basque Country led to the adoption of their own self-governing rules, and the election of their own parliaments. The finality in 1982 gave a decree to the king for the dissolution of the Parliament and requiring a general election to be held. The Spanish Socialist Worker Party achieved a majority of the seats and this led to their continued success in elections from 1986 through 1993.

While Spain experiences a high unemployment rate, they did enter the European Union and adopted the Euro currency.