Simple machines allow us the ability to accomplish daily tasks easily. Many of these machines are things that you use and may not be aware of it. Some of them were developed by ancient cultures that did not have the kind of technologies that we have today. 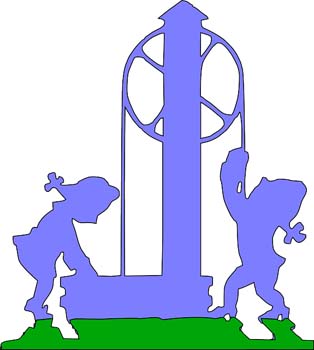 A pulley makes use of grooved wheels combined with a rope or cable to lower, raise or relocate a load. The amount of ‘pull’ that has to be added to the rope or cable is in direct proportion to the weight that is being raised, lowered or moved. If you have a 100 lb. block on one end, you will have to add an equal amount of pressure in the pulling or pushing process. The wheel of the pulley has to be able to handle all 100 lbs. of stress and the person (or machine) on the other end must be able to lift, push or pull at that rate. A standard pulley is good for lesser weight objects.

Another concept of the pulley is through the use of a block and tackle. This is the addition of an additional wheel that helps to offset that amount pressure that will be needed to pull, push or move. The second pulley actually allows a more balanced concept. In the case of the 100 lb. block, each of the wheels will handle 50 lbs. of pressure. Lifting an item higher into the air using a block and tackle can be referred to as a force distance tradeoff. The more wheels that you add, the better the balance in the weight.

A lever is a stiff, firm bar or board that rests on a support that is referred to as a ‘fulcrum’, that moves or lifts loads. The ancient Greek mathematician, Archimedes, described the use of levers in 260 BC and they were probably used much longer before that. 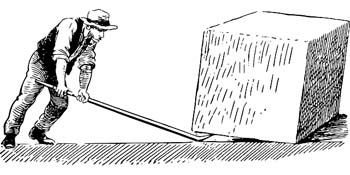 An example of a lever could be a child’s game of teeter-totter. The fulcrum is the center support with a piece of wood or material balanced on top. Each child gets on either end and the lever acts as a way to keep the balance.

A first class lever is the type used in the teeter-totter. A second class lever has the fulcrum at one extreme end with the board or bar used to tip a load from one end to the next in a pulling and pushing motion. The third class lever appears the same as the second class, except that instead of pulling up on the one end, the pulling is done in the center. 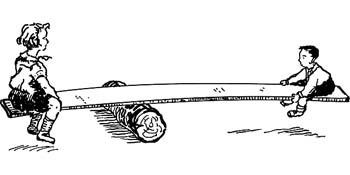 A wedge is used for cutting apart materials, balancing at an angle or as a ‘stop’. It has at least one slanting side that ends in a sharp or angled edge.

An example of a wedge can be those that are used in handled tools, as a car tire ‘stop’ or even to leverage or create a balance when placed as a back brace. The ancient Egyptians used wedges as a way to create balance between the blocks of stone in the pyramids.

A screw is actually an inclined plane that is wrapped around a pole. The original purpose was to lift objects or hold things together. We see examples every day in the key and lock system as well as a wine corkscrew.