The sea of Okhotsk is located in the west side of the Pacific Ocean. It was named long time ago after the first town in the Far East of Russia. The sea is bordered by Kamchatka Peninsula on the Eastern end, the Kuril Islands on the southeast end, the island of Hokkaido on the southern corner, the Sakhalin Island along its western border and a long extension of eastern Siberian shore which includes the Shantar Islands along its west and north corners. On its northeast corner is the Shelikhov Gulf. 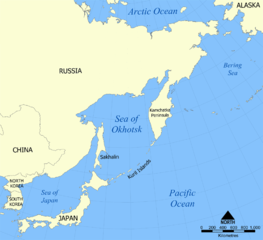 Sea of Okhotsk Facts for Kids

Some of the interesting the Sea of Okhotsk facts