Create Your Own Miniature Salt Flats 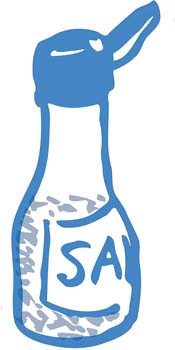 Salt flats are usually created when there isn’t enough drainage for a salt lake. Combined with a flat land location and the dry, arid climate, the water doesn’t have circulation and evaporates to create a harsh environment where animals and plants cannot survive.

As desolate as the salt lake looks, it is actually quite fragile. The salt crystals are delicate and can be crushed very easily, exposing the mud below the salt. For a long time, no one thought that anything could survive in the extreme salty conditions, but scientists have discovered that in the moist layers below the salt surface there are a variety of microbes that live and thrive. 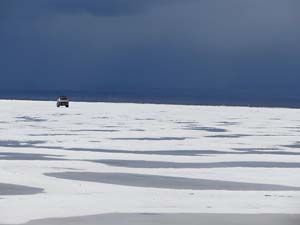 These discoveries have led them to consider what kinds of life could exist on other planets, where conditions might be similar. Until they began researching, scientists never thought that any life cold grow in such high salt conditions and the discovery of life in the lower layers, that do not get any sun, was quite a surprise for them.

When you look out onto the salt flats, you see a huge expanse of salt that is actually on the surface. But the flats are moving and changing, creating cracks and crevices. The environmental conditions of rain, wind and the occasional flood rearrange the flats and sometimes dissolve the salt back into solution. The water then evaporates and the process begins again, creating new top salt layers. 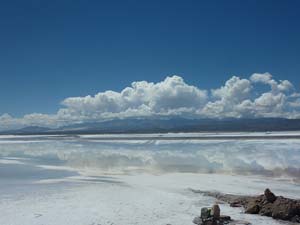 You can create your own salt flats with a little dirt, hot water, salt and baking soda. These are the ‘building blocks’ of the salt flats. Since these are in layers, you will need to use a ceramic dish or bowl, layering the soil with salt and baking soda that has been dissolved into the hot water. It will take time to allow the water to evaporate and then you can see the resulting miniature salt flats.

If you want to try a full experiment, there is a complete worksheet for you to use. See if you can make your own salt flats and measure how the different types of microbes grow. 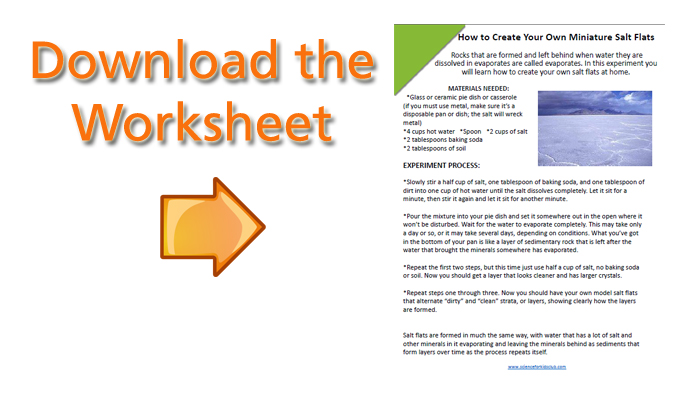