A Rainbow is made up of seven colors: red, orange, yellow, green, blue, indigo, and violet (ROYGBIV). 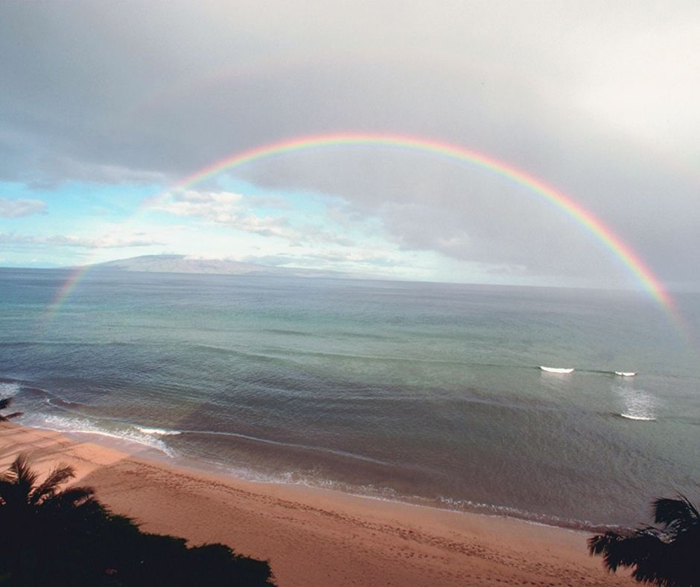 A rainbow is a meteorological event that is caused by the reflection of sunlight in the atmosphere.

Rainbows are patterns of rainbow-colored light visible only when it is raining. They are formed by sunlight refracting through smooth, liquid water droplets.

It is also known as the Rayleigh Scattering Process.

Rainbow formations are formed by a distinctive “rainbow path” (also called the “rainbow disc”) that is generally a fairly large component of the auroral radiation that is reflected off the ice, rock, and minerals on the Earth’s surface.

What is a Rainbow 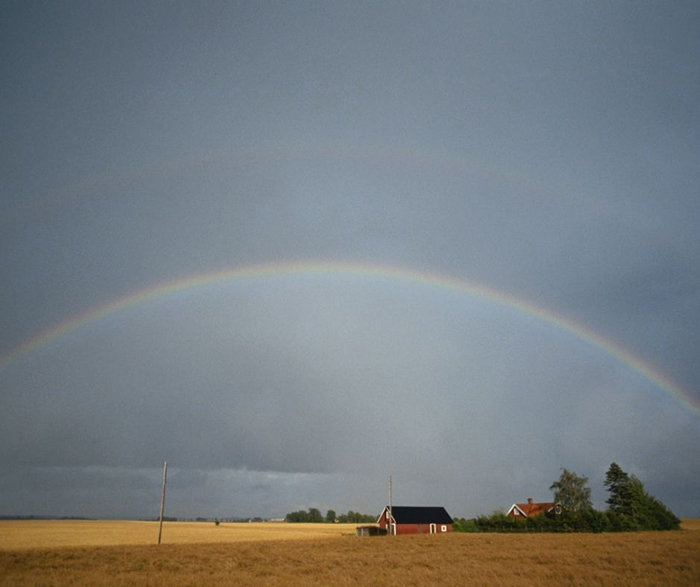 When you look at the sunlight (with sunglasses on so you don’t hurt your eyes), the light looks white, doesn’t it? It isn’t white, though, it is actually a whole lot of different colors.

The light coming from the sun is actually every color we see in a rainbow. So why don’t we always see these colors? Why do we usually just see white?

The light we see is white because it is not passing through anything. But if the sun is shining while the rain is falling or immediately after the rain stops (while there is still a lot of moisture in the air), the sunlight bends (refracts) as it passes through the water in the air. The bending motion lets us see the true colors of the sun…a rainbow.

BUT…we cannot see the rainbow even if it is there UNLESS we are standing (or sitting) between the sun and the rain. So when you think about it, rainbows are really pretty special.

Where is the end of a rainbow

The answer to that question is easy…there is no end. A rainbow is actually a circle, but because we are looking at it from the ground, we cannot see it all.

A Rainbow is not a Thing 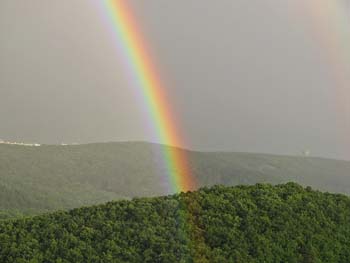 A rainbow is not something that can be touched or studied or examined. A rainbow is an optical illusion. This means it is nothing more than a light ‘trick’.

Because a rainbow is light, this also means that a rainbow is never in any one place. In fact, no two people see the exact same rainbow.

Even if ten people are standing side by side and all say they see a rainbow, they are not seeing the same one.

Each person is seeing the light bending through their own eyes…not anyone else’s. WEIRD!!!!

The colors of the rainbow 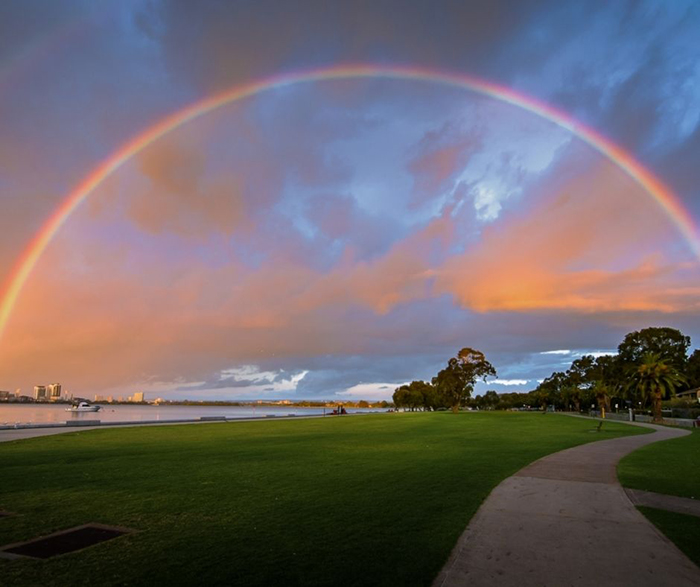 So, you know the colors of the rainbow are red, orange, yellow, green, blue, indigo, and violet. But, let’s have a little look at some of them in detail.

Because of the way the light bends, the red ribbon of color in a rainbow will always be on top of the outer edge of the rainbow.

As a special rule, the circles within the stripes on the rainbow will always be on top of the stripes.

Things to look for in rainbow colors:

Blue: Blue is most often found in the center of a rainbow.

Yellow: Yellow is considered the least common of the colors of the rainbow. It is the least diverse. As a color, it is much more similar to yellow than black or white. 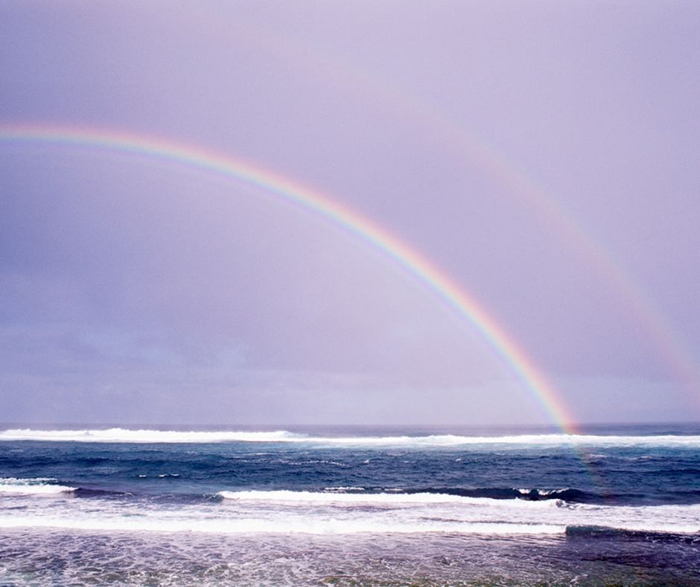 A double rainbow happens when the light bends and reflects off the water drops in the air TWICE. In other words, the second rainbow is a reflection of the first rainbow. The second or double rainbow will be lighter in color and the colors will be reversed.

When you see a double rainbow, you will notice that the sky between the two rainbows is dark and unlit. This band of dark sky is called Alexander’s Band.

It has this name because of the man who first noticed that there was no light in the sky between the two rainbows.

His name was Alexander of Aphrodisias. He lived over 2,000 years ago.

No matter how rainbows are made or which color is on top or bottom, we can all agree that rainbows are one of the prettiest sights in nature.

Here are some interesting facts about rainbows. The rainbow is an example of an equilateral triangle. The rainbow can be divided into two sections – a central section with a bright disk, and two smaller off-set sections.

The bright disk is all that is seen, but sometimes the more faint areas of the rainbow are very clearly seen. And each of these two sections of the rainbow will vary in size.  So the color of a raindrop depends on the number of off-set sections that it divides.

Rainbows are created when sunlight shines through cloud droplets and crystalized ice. It is light passing through these droplets, or frozen water, that has the ability to reflect rainbow-like colors.

Water drops will reflect about 60 percent of the light they receive when standing in an atmosphere that is saturated with moisture. This will result in rainbows, while still allowing light to pass through the droplets.

The same process that causes rainbows to appear in the sky in the daytime is also responsible for creating rainbows when an object shines in the sun’s light. This phenomenon is known as atmospheric refraction and is caused when the air around an object reflects the light bouncing around inside the object.

This allows sunlight to hit the object and heat it up, causing an air molecule to relax and become part of the vapor, which is causing the precipitation. The thicker the particles, the more heat will be released when the air molecules relax.

Rainbows have been known about for millennia and are considered to be the most beautiful astronomical phenomenon. There are hundreds of different types of rainbows that can be found across the globe.

One of the best-known rainbows is known as the blue-green Aragorn rainbow, which is a natural occurrence found in the Netherlands. This rainbow is actually a combination of about 80 different colors of light created by different colors of water droplets.

The rainbows are created by a fluid called hygroscopic particles that absorb the light and re-emit it at a longer wavelength. The phenomenon is called hydrodynamic refraction and has its origins in the resonance of water molecules.

Other rainbows exist, but the style of structure that forms the perfect circle is what gives the illusion of an object falling down from the sky. However, that is definitely not a rainbow, rather it is the appearance of a real looking rainbow.

The ability to create a rainbow is as ancient as human memory itself. Ancient peoples believed that if a large amount of mud were placed around a fire, it would create a rainbow when covered by a layer of water. This same technique is what gave rise to the famous rainbow effect of artist Francisco Ribera.

In the ‘Rainbow’ sequence from the following movie, One Hundred Years of Solitude, the tiny spark of a flame combined with the clouds above creates an actual rainbow. This effect occurs all over the world, even in Africa, where the horizon seems to hover in the sky.

So, now you know about rainbows