The Ancient Egyptian Pyramids are one of the greatest mysteries of the ancient world.

These structures are so impressive for the time that they were built in!

The Pyramids were built as the burial places for the Pharaohs.

This would be their final resting place before they went into the afterlife which was part of the Egyptian religion. 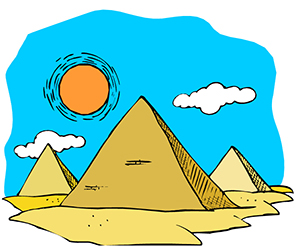 The Pyramids housed items and people that would help the Pharaoh to have a successful afterlife.

Pharaohs would begin having their pyramid built when they became a ruler because these gigantic structures took so long to build.

You will find most of the pyramids on the western side of the famous Nile River (In the Valley of the Kings) as this helped with the transportation of the building materials.

Egypt is home to about 138 pyramids and who knows if archeologists will discover more one day?

Question: What were the Ancient Egyptians pyramids built for?
Answer: Burial places for the Pharaohs

Question: Which pyramid was the first pyramid built?
Answer: Step Pyramid of Djoser

Question: Why did the pyramids have fake passages and burial chambers?
Answer: To try and trick anyone who tried to rob the pyramids

Question: How tall was the Great Pyramid of Giza?
Answer: 146 meters

Question: Why were the pyramids built near the Nile?
Answer: It helped with the transportation of the building materials