Portugal is in southwestern Europe on the western coast of the Iberian Peninsula. It is the country that is most westerly in all of the European mainland. The country has varied temperatures, with the north as cooler and wetter and the south parched and hot. The land itself is a combination of northern forests and southern lowlands. A majority of the people of Portugal live in or around the coast, with only one third living in the urban or city areas. 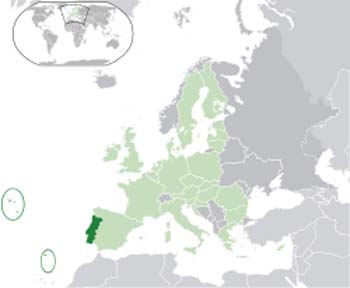 Due to access to the sea, Portugal has long been an area that was sought after and fought over throughout the centuries. The country was invaded and taken over numerous times.

In 1140, Portugal became independent and Alfonso Henriques, who had been the dominant leader of the area, declared himself Portugal’s king. This was confirmed by the Papal diplomats as they recognized his position. Alfonso began a quest to retake many of the lands that had been taken from Portugal and both trade and religion prospered.

Portugal experienced success in agriculture and sea trading until the Black Death hit and one third of the population died.

The close proximity of Spain made Portugal an easy target and the country was constantly in fear that the more powerful country would try to take them over. After a two year war with Castile, Portugal aligned themselves with Great Britain in 1386.

By the 15th century, the Portuguese had built up their country to be a great seafaring nation. They sent out ships for exploration and new lands. They were in direct competition with the Spanish fleets that were out discovering new trading routes. Many disputes rose up and an agreement was drawn regarding territories. It was during this time that Portuguese captain, Bartolomeu Dias became the first person to sail around the Cape of Good Hope in Africa.
*The 16th and 17th centuries brought continued success in sailing, locating countries that had resources and spices but by the end of the 17th century the Dutch had become a stronger sailing country and displaced Portugal’s position.

Portugal still had many territories in the 18th century and when one of the territories (Brazil) had the discovery of diamonds, this increased the Portuguese treasury. Throughout this time there were a few battles with various countries and political problems within.

In the 19th century the French invaded Portugal forcing the court to flee to Brazil. The British sent in troops to displace the French and only some of the court returned to the country. There were uprisings within Portugal until finally a declaration was drawn and the king had to return and accept the terms. Later, a charter was drawn up to limit the power of the monarchy and replace the previous constitution but a new king took over and destroyed the agreement.

A rebellion against the new regent caused disruption in the country and civil war broke out. During the time of the industrial revolution many of the European countries were profiting but Portugal remained poverty stricken.

By the early 1900’s new representatives created a new constitution and nearly at the same time some of Portugal’s territories were themselves causing an uprising. Keeping everything under control severely strained the economy of Portugal.

By 1974 those in favor of a revolution wore red and white carnations (known as the Carnation Revolution), the army itself staged an overthrow and they had a restored democracy for the country.

1986 was the year that Portugal joined the European Union and loans from the union allowed Portugal to invest in the severely depleted infrastructure. A hydroelectric dam filled a reservoir that has resulted in the largest manmade lake in Europe.

Portugal has industries that include wood pulp, cork, paper, textiles, footwear and metalworking.

The agriculture of Portugal includes potatoes, grapes, olives, grain and the raising of sheep.

Exports from Portugal to locations around the world include: clothing, chemicals, paper and cork products, machinery, footwear and hides.