Do you get in trouble for playing with your parent’s porcelain plates? This fragile material is usually handled with care and is just for decoration. However, during the Ming Dynasty in the 15th century, an entire tower was built out of it! This incredible building was known as the Porcelain Tower of Nanjing. The tower is a pagoda which is a traditional form of building in Chinese architecture.

It was located on the south banks of the Yangtze River, in China. Emperor, Yong Le, designed the beautiful building and it took 17 years to be completed! This building took many knocks over the years, it was first hit by lightning in 1801 and the top three stories were destroyed! 50 years later, during the Taiping Rebellion, most of the structure was ruined. 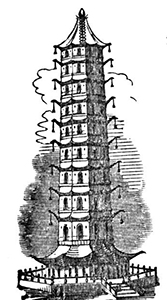 Question: During which dynasty was the Porcelain Tower of Nanjing built?
Answer: Ming Dynasty

Question: What purpose did the white porcelain bricks serve, apart from their beauty?
Answer: Helped the tower to stay cool

Question: What shape is the top of the building?
Answer: Beautiful golden sphere

Question: What religion was worshipped in the tower?
Answer: Buddhist