The polar bear has lived in the cold regions of the earth for thousands of years.

More recently, as the polar caps melt and they are losing their habitat, they have become the symbol for global warming. 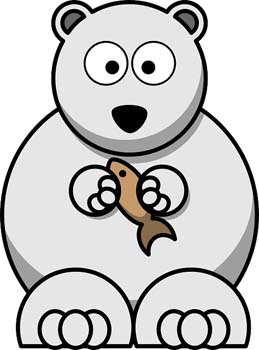 How long do Polar Bears Live?

Polar bears in the wild can live as long as twenty five years.

Females being to have babies at the age of four or five years.

The female will dig a hole in a large snow drift or find a cave to deliver her two ‘cubs’.

The family remains in the shelter through the entire winter and will emerge in the spring.

Polar bear cubs are born at nearing one pound and are about the size of a rat.

With the right diet, the polar bear cub can grow to the full size of a man within a year. 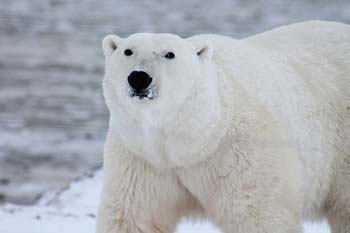 Polar bear females need to eat a lot of food to store the fat that will be needed when they are in their dens for the whole winter, raising their babies.

They will not come out and the fat is needed for both their own and the babies’ survival.

The color of a polar bear’s fur is deceiving

We may think it is white, but it isn’t. Each of the hairs of their fur is actually a hollow clear tube.

We see it as white because of the reflection of the light.

The design of the fur traps the infrared heat of the sun and keeps the bear warm.

The fur of the polar bear is actually water repellent with a natural oil.

When the fur is wet it doesn’t ‘mat’ and this allows the polar bear to shake excess water off easily.

When they are born, a Polar Bear cub can weigh between 450 to 650g. The male cub is usually heavier than the female.

Like lots of other small animals, they are born with their eyes closed and fairly helpless.

Their fur is very fine and almost makes him look as if they don’t have any. They stay in the den to keep warm.

Usually, they are born between November and December.

The mother usually looks after the cub and the father plays no role in raising them whatsoever.

Depending on their exact location, they will stay in the den until March, April or May.

In the beginning, the cub will not help with hunting but learn to stay quiet while the mother hunts for seals.

The cub will stay with the mother for roughly 2 ½ years and during this time, they will learn how to hunt and survive in the Arctic. 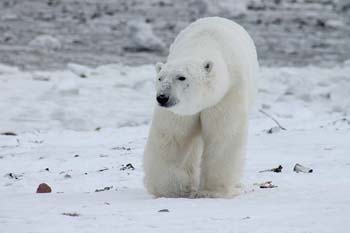 For several reasons the polar bear is classed as a vulnerable species.

This is because of habitat loss due to climate change, and for many decades large-scale hunting had also contributed to this.

The population has rebounded because of international concern and the controls put in place to help.

The polar bear is an important part of the cultural life of the local people.

It is also known as the “White Bear” and sometimes referred to as “Nanook.”

Because they spend many months at sea, they are classed as a Marine mammal.

They are the only Marine mammal with large feet and powerful limbs, which allows them to run on land covering a lot of distance.

They love being on this sea ice and the areas that have sea ice and water; this allows them to hunt for food (seals) easily.

As the ice packs melt during the summer months, this forces the bears to be on land and wait until everything freezes again.