Poland has the unique distinction of being the largest country within central Europe. Most of the countryside is low-lying but the country does boast a number of woodlands and lakes. Poland stands as a unique country with very few minorities in its population. While many of the neighboring countries have multiple languages and religions, Poland only uses Polish as their language and they share the common religion of Roman Catholicism. While they have ocean access to the Baltic Sea, they share land borders with Russia, Lithuania, Belarus, Ukraine, Slovakia, the Czech Republic and Germany. 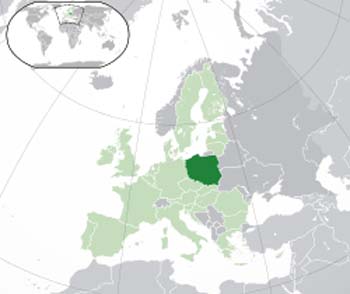 Poland’s access to the Baltic Sea has been one of the single reasons that the country has been a key focus throughout the centuries for attack and takeover.

The locale that is what we call Poland was inhabited by a number of different tribes and groups in the early part of the AD centuries. They included the Balts, Celts, Huns, Scythians, Goths and the Germanic peoples.

It is thought that the 6th or 7th century was the time period for the arrival of the Slavs and this involved many different tribes. By mid-10th century, the Polania tribe was the dominant group of people and (according to legends) that it was Chief Piast that united the people into one group for the country, calling it ‘Polaska’ (Poland).

World War I requires that the people that lived in the area fight in the armies of Russia, Germany and Austria. The land that was once Poland becomes a battle ground for the war. Once the war was over, the Treaty of Versailles returns the area of western Prussia to Poland, once again allowing ocean/sea access. Winning the Polish-Soviet War gains Poland the Ukraine and Belarus. While pacts were signed with both Germany and the Soviet Union, they proved to be useless as both countries plan on dividing Poland.

World War II brought the invasion of the German Nazis to Poland and eastern Poland tried to fight off the attacks of the Soviet Union. The results of these two situations ended in mass executions, arrests and exiles. Hitler’s attack on the Soviet Union left Poland under the German Nazi control. The later Warsaw Uprising saw the Soviet Union to win against the Germans and they took over Poland as part of the Yalta Agreement between the Allies

Over the next number of years, Poland exists under communist rule and from 1956 through 1983 the Polish people led many uprisings and rallies to try to gain their country back. By 1980, the strike leader Lech Walesa tries to establish a solidarity movement which had limited success and later led to martial law being instituted. The solidarity was restarted in 1990 and a free election votes Walesa as part of a new government. The price that the country paid included massive inflation and economic problems.

1997 brought about the Poland constitution and allowed Poland to be recognized as a country. They joined NATO and continue to be one nation.