The Panama Canal was built to shorten the distances ships needed to travel to deliver the cargo they were carrying onboard between the Atlantic Ocean and the Pacific Ocean.

It is a 48 mile waterway that was crosses the Isthmus of Panama. The French began to build the canal back in 1881. The construction stopped and began again in 1904 when the United States took on this project.

The canal was completed after 10 years of hard work and officially opened on the 15th August in 1914. The Panama Canal is still used today and is seen as an important part of international trading.

The canal works by using three pairs of locks at each end, these locks are used for lifting and lowering the ships onto different water levels.

The locks are similar to water-filled chambers that help move the boats. New locks were added in 2016 so that larger ships were able to pass through the canal.

This industrial creation has saved ships a journey of 10 000 miles! 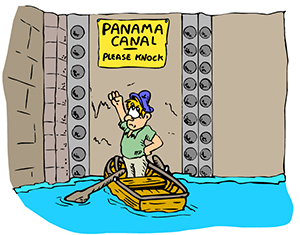 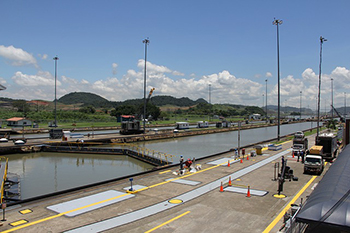 Question: Which two oceans does the Panama Canal connect?
Answer: Atlantic Ocean and the Pacific Ocean

Question: What is the length of the canal?
Answer: 48 miles

Question: How long did it take to build the Panama Canal?
Answer: 10 Years

Question: Can any boats fit through the canal?
Answer: It is estimated that the canal misses out on 30% of the cargo transport

Question: What was the name of the treaty that allows the service to be used by all nations?
Answer: The Torrijos-Carter treaty