Neptune is one seriously large planet that has some really extreme weather conditions. It is further away from the Sun than any other planet in our Solar System. 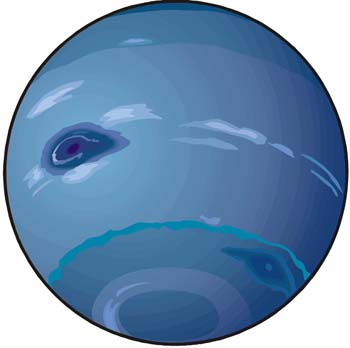 Neptune is one of the four ‘gas giants’ like Jupiter, Saturn and Uranus that are only made of gas. Neptune is big old ball of hydrogen and helium. At least you could get that squeaky voice like you get from helium balloons!

Storms have been spotted swirling around its surface. Freezing winds have also been seen that blow about ten times faster than hurricanes on Earth! Well a trip here is certainly a big no-no! It is by far the windiest planet! 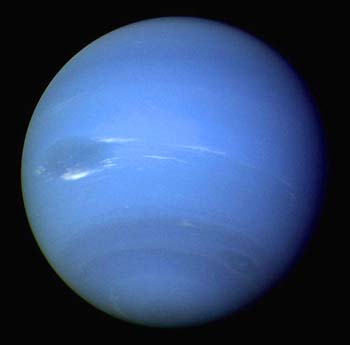 In 2011 Neptune completed its first orbit around the Sun after its discovery 165 years before.

Now Triton is no ordinary moon and is rather unusual. Why is this? Well it actually orbits it’s away around Neptune in the opposite direction of Neptune’s own rotation on its axis. All the other moons in the Solar System follow their planets around like a loyal friend. Think about that pond again, and try turning on your own axis, but this time take a friend with you. If you’re turning clockwise, have them go round you anticlockwise, be careful, you could get dizzy and fall down!

Triton is about the same size as our own moon. In 1949 a smaller moon, called Nereid, was discovered by telescope. Another six moons were discovered in the 1980s by the Voyager spacecraft. All these moons are between Triton and Neptune.

So Neptune has 13 moons in total. As Neptune was the God of the Sea, all the moons are named after less important ancient Greek sea gods, like Triton, or sea nymphs, like Nereid.

When Voyager 2 visited Neptune they could see a massive storm which was called the ‘Great Dark Spot’ because it looks like a big dark oval shape. No one knows how long the storm has been going on or if it even still exists. When the Hubble Space Telescope sent pictures back there was no sign of the Great Dark spot but there were two others, which eventually faded away.

Neptune also has rings, wow! There are six of them which circle the planet, and it is believed that they are fairly new.

So now you know all about this stunner of a planet, which shows off its gorgeous colours! Go on, and share all the new info you know!