Mount Everest is the world’s highest mountain. It is part of the Himalayas, a huge mountain range in Southern Asia that includes more than 110 mountains over 24,000 feet (7,300 metres). Mount Everest is on the border between China and Nepal, with the border crossing the mountain’s summit. 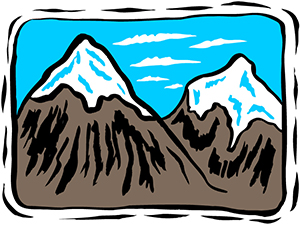 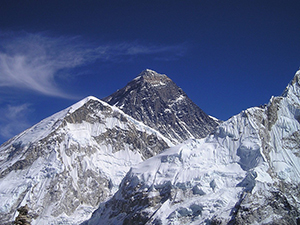 Question: How was Mount Everest formed?

Answer: The Himalayan mountain range, which Everest is part of, began around 40-50 million years ago when the tectonic plates of India-Australia and Eurasia collided with one another. Tectonic plates are huge pieces of solid rock that make up the Earth’s crust and land masses, they are constantly moving, although extremely slowly.

This movement and collision pushed down the Indian-Australian plate under the Eurasian plate, causing the rock to fold back upon itself creating the mountain range. The Himalayas and Everest itself, continue to move a few inches northeast every year and to raise a very small amount.

Question: Can anyone climb Mount Everest?

Answer: The Nepalese government is currently looking at increasing restrictions on who will be allowed to attempt Everest in the future. Currently you need to be over 18 years old and to be able to afford an $11,000 permit from the government of Nepal and a personal guide. There are other costs such as many weeks of food and camping at base camp (17,600 ft/5,364 metres) to acclimatize, the cost of equipment, medical supplies, flights and other transport.

In 2001, Erik Weihenmayer made history as the first blind person to reach the summit of Mount Everest. However, as of 2017, the Nepalese government has banned solo climbers, blind climbers and double amputees from attempting the summit. For climbers looking to avoid Nepalese regulations, there is always the possibility of climbing from the Tibetan side, where less restrictions have been made. However, around 75% of successful summit attempts have been made from the Nepalese southern side.