Making Clouds in the Kitchen

We see clouds in the sky every day in a variety of shapes and sizes. Clouds move across the atmosphere of the earth with the various wind currents. Different types of clouds are formed, depending upon the combination of wind and temperature.

Clouds are created when the sun heats water on the earth and it evaporates into the air. As it rises, it will cool and begin to collect into tiny droplets of water that cluster together, to form a cloud. It will float along in the sky as long as the air inside the cloud and the cloud itself is cooler than the air that surrounds it.

There are various air currents called ‘jet streams’ that can move clouds in the sky as fast as 100 mph. Those clouds that may be part of a rain storm typically move at around 30-40 mph. There are different types of clouds, depending upon how high or low they are in the sky. Each one is affected by the wind and temperatures that carry them.

Clouds have a white appearance because they are made of small water droplets as well as ice crystals. They reflect light in all of the colors of our color spectrum: red, orange, yellow, blue, indigo and violet. When the combine together, they appear white. If the clouds become too thick, they won’t allow the sunlight to shine through and they take on darker shades of grey. 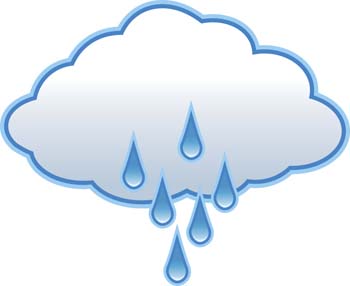 The sky is filled with tiny dust and dirt particles that attract the water droplets. As more and more droplets attach to the dirt and dust they get bigger and bigger. When they are too heavy to be maintained in the cloud they fall to the earth as rain. If the external temperature is below freezing, it will freeze the water droplets to become snow crystals.

Creating your own kitchen clouds is fairly easy, but you will need to have an adult helper as you will be working with hot water on a stove. It only requires: Water, a tablespoon; a narrow neck heat-resistant flask or bottle, an oven mitt, an ice cube tray (metal works the best), and an ice cube.

Have your adult helper boil some water in a microwave or stove. Allow the water to cool for 30 seconds. Ask your adult helper to measure two tablespoons of the water into the narrow necked bottle/flash. Quickly add your ice cube at the mouth of the bottle. Watch the results.

If you are interested in creating a full experiment to create clouds of your own there is a worksheet that you can download. Can you think of any situations where making clouds could be used in real life? 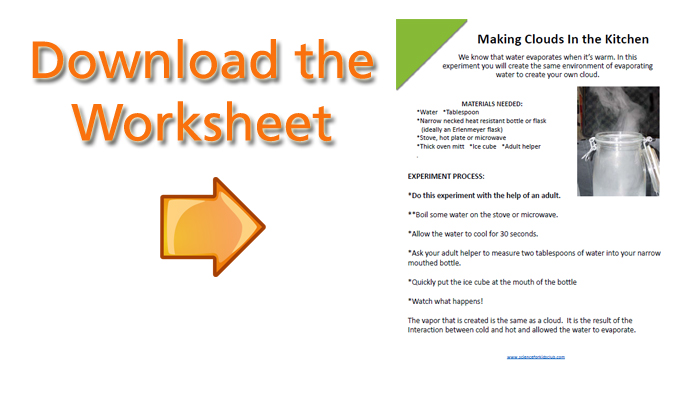