The Lighthouse of Alexandria was the most famous lighthouse in the World up until the Middle Ages and it was classed as one of the Seven Wonders of the Ancient World. It is believed to have been the first ever lighthouse to have been built. The lighthouse was constructed in the 3rd century BC and destroyed by earthquakes between the 12 and 14th centuries. 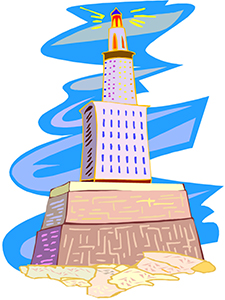 Lighthouse of Alexandria Facts for Kids 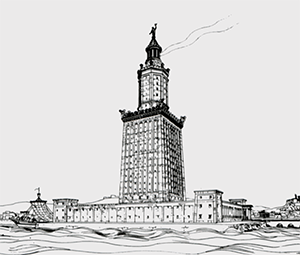 Question: Why was the Lighthouse of Alexandria built?

Answer: When Alexander the Great founded Alexandria, he wanted a new regional capital city with good access to the Mediterranean Sea to improve access across his expanding empire. However, access by sea to his new city was dangerous with shallow spots, reefs and a lack of high places that could serve as lookouts to guide ships.

Upon the Alexander’s death, the region was taken over by Ptolemy I who decided to try to find a solution to reduce the number of ships being wrecked on their approach into Alexandria. He enlisted the help of Sostratus of Cnidus who designed and built the Lighthouse of Alexandria, which resolved the problem, providing a high lookout point from which ships could be guided in safely.

Question: How was the Lighthouse of Alexandria built to last so long?

Answer: The Lighthouse of Alexandria had a large square base that was built from huge stone blocks that were stuck together with molten lead to ensure they would hold tight against the power of the waves. This gave the building a strong, stable base. The tower part of the lighthouse was built in three sections, a square-shaped section, an octagon-shaped section and at the top, a cylinder-shaped section.

To ensure that the structure was as stable as possible each section was made smaller than the one below it. The whole tower was built from light-colored stone blocks and narrowed towards the top. The lighthouse’s design enabled it to last for almost 1,500 years. It was repaired several times in the last few centuries of its existence, and it is thought to have remained in use until early on in the 14th century.