The Leaning Tower of Pisa is one of the most well-known buildings in the world. It makes up part of the cathedral complex in Pisa, Italy. The tower was designed to be a circular bell tower and its lean started in the early days of its long construction period. 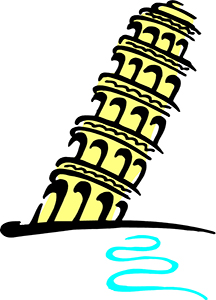 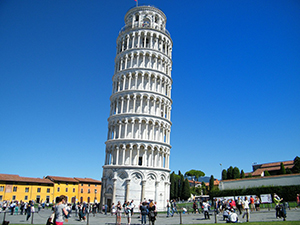 Question: Why doesn’t the Leaning Tower of Pisa collapse?

Answer: The Leaning Tower of Pisa leans because its foundations are in soft soil which has over time caused it to sink. This has caused the tower to lean.

Although recent corrective work has made sure that the tower remains stable, the tower has remained standing over the years in spite of several earthquakes and two World Wars. These events could have toppled even straight towers, but experts believe that the same soft soil that is responsible for creating the tower’s tilt has protected it from tremors, by absorbing the vibrations.

Question: Is it possible to go up the Leaning Tower of Pisa?

Answer: Visitors have been allowed to enter the tower since the end of 2001, after having been prevented from entering in 1990. Following recent stabilization work the tower is safe to enter and it is no longer increasingly moving away from the vertical.

Visitors can climb the many stairs to reach the top. Tourists often take their photos with the tower to look as if they are holding up or pushing it over. Today more than 1 million tourists visit the Leaning Tower of Pisa every year, making it one of Italy’s top tourist destinations.