The Itaipu Dam is the world’s largest producer of clean, renewable energy. The hydroelectric dam is situated in South America on the border between Brazil and Paraguay, where it supplies 16% of Brazil’s domestic energy consumption as well as generating 76% of Paraguay’s energy needs. It is classed as one of the Seven Wonders of the Modern World. 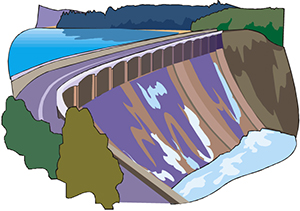 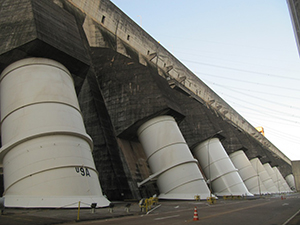 Question: What is a hydroelectric power plant?

Answer: A hydroelectric power plant is a construction that is used to generate electricity from water. The different levels of a river are used and where possible dams are created to ensure a continuous, long flow of water. The pressure of the water, as it falls, turns turbines within the power plant.

This turning creates an electromagnetic field which generates electricity. The higher the distance that the water falls, the greater the amount of energy that can be generated. Natural waterfalls can also be used.

Question: What are the advantages and disadvantages of the construction of the Itaipu Dam?

Answer: What are the advantages and disadvantages of the construction of the Itaipu Dam? There are many advantages, the Itaipu Dam provides low cost, clean and renewable energy. This means that the energy produced is environmentally friendly and at a lower cost. In fact, the electricity generated by the Itaipu Dam is 55% cheaper than that produced by other local power plants.

The construction and upkeep of the dam has also created many jobs and improved the economies of Brazil and Paraguay, while improving the reliability of their electricity supply. The company that runs the Itaipu Dam also pays money for the use of the water to both countries. This has helped to benefit 16 cities who have been affected by the creation of the dam, and has paid for improvements in health care, sewage works, education, housing and general quality of life projects.

However, the construction of the Itaipu Dam has caused environmental problems for the area, with a loss of habitat for certain plants and animals with the creation of the lake. Also, the creation of the dam has severely disrupted fish migration and other river animal life. There has been a massive social impact with residents of whole villages being relocated and a loss of their homes, history and way of life. The building of the dam also meant the loss of the spectacular Seven Falls waterfall, a popular tourist destination and landmark.