The Republic of Ireland is an island in Europe and has a variety of landscapes including interior lowlands of agriculture and coastal mountains. The country has many hills, bogs and lakes. Ireland is divided into two distinct areas: Northern Ireland which is the northeast portion and is part of the United Kingdom and Southern Ireland or ‘Eire’ which consists of 85% of the total area. It is known as the ‘Emerald Isle’ because so much of the land is lush with green growth and forests. 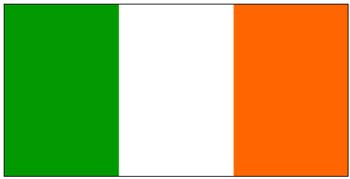 Facts about Ireland for Kids: 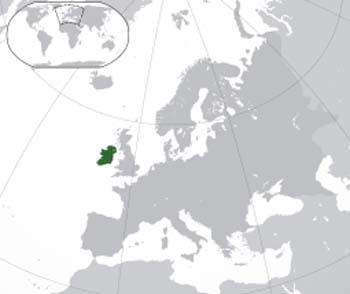 Nearing the time of Christ, Ireland was actually divided into five kingdoms called the ‘Five Fifths of Ireland’ that eventually evolved into seven independent kingdoms by 400 AD. Each kingdom had a king and they were all involved in raids and battles with the neighboring Britain that was conquered by Rome.

One of the raids involved the capture of a 16 year old boy that was returned to Ireland and then later sold into slavery. During his time as a slave the young boy became interested in religion and by the time he was 22 he escaped. He studied theology in the Roman Catholic Church and in 432 AD he returned to Ireland to convert the Irish to Christianity. The man was to become the patron saint of Ireland, St. Patrick.

The 9th and 10th centuries involved great attacks from Viking raiding groups. Monasteries were destroyed and some of the Vikings settled in the area. By 853, Ireland was invaded by the Danes and as they also became settlers, they adopted Christianity.

Upon the creation of the four ecclesiastical provinces (Ulster, Leinster, Meath and Munster), in 1152, it was elements of both the Irish and the Danish that assisted in forming a united Church. The reform was not accepted by many within the Irish church, especially Pope Adrian IV who was an Englishman.

*By 1155, the Pope gave King Henry II of England the title of lordship over Ireland. The action was taken to assist in correcting some of the religious direction. It was in 1168 when the English invaded Ireland, taking lands away from the current owners and making changes to the social and political structures. This started the negative relations between Ireland and England that would last for centuries.

*Migration of many Normans from England to Ireland occurred from the twelfth century to around 1400 AD; with many relocating to Dublin. The problems between the existing population and the new arrivals caused a 1367 law to keep the two groups apart.

*King Henry VII of England extended English law over the entire country of Ireland in 1495 and took control over the existing parliament of Ireland. He was against the Roman Catholic church and since he had accomplished the dissolving of the church in England, he tried to do the same in Ireland. His attempts were in vain, as the Irish population rose up against the English king.

*When Queen Elizabeth took the English thrown, the Irish were already steadfastly linked with Roman Catholicism and they refused to accept any religious change. The English continued to try to dominate the Irish and by the 1560’s they succeeded in suppressing an Irish revolt. Queen Elizabeth took that opportunity to take all of the lands that were owned by Irish noblemen and their families and give them to Englishmen. It took until 1660 for the English to take over the area completely and for English law to govern.

*King James I of England required that all Catholic schools be closed and that Irish children be instructed in Protestant schools. The prior terms of Anglo-Irish and English were then changed to the terms Protestant and Catholic. It was during this time period (1603-1625) that the start of the Irish emigration began.

*These actions were accentuated when Cromwell took over England and he took all of the remaining Catholic holdings. After Cromwell’s death, the Irish took back their lands and by 1690 they defeated the English and signed a treaty with London at Londonderry giving them back a number of rights. The treaty was then rejected by the Irish parliament that was dominated by Protestants.

*The problems between the two religious groups widened and in 1727 Catholics were not allowed to participate in any public office and did not have any voting rights.

*The 1798 Irish revolt started a series of events that eventually ended with the Irish relinquishing their own governing parliament. In 1801, the United Kingdom of Great Britain and Ireland was created, but this union was not popular with all of the people.

*The Irish that lived in the farming communities were hit the hardest with the potato famine in the 1840’s. With little or no food the population decreased from 8.2 million to 6.6 million through disease, starvation and emigration. Many of the Irish fled to the United States during this time.

*The progress back to prosperity for the Catholic part of Ireland was slow but they gained higher affluence as they enjoyed some of the benefits of the industrialized British side. It was at this time that they demanded national self-government and they gained ‘home rule’ abilities that were separate from the Union parliament. While a bill was passed in 1914, it did not go into effect until after World War I.

*By 1920 the ‘Government of Ireland Act’ was passed allowing both the north and south to have separate parliaments. In 1921 a treaty was signed with Britain to establish the Irish Free State as a self-governing entity within the British Commonwealth of Nations, effectively giving Northern Ireland the opportunity to take six of the northern counties out of the dominion. This was what started the civil war in Ireland as anti-treaty and pro-treaty people.

*Although a 1937 constitution was created, it only lasted eleven years and finally in 1948 all ties were severed with the Commonwealth, allowing the creation of the Republic of Ireland.

*The civil war continued for many years, but the basis of the war was the difference in religious beliefs and the continued interference of the British. Many of the troops of England would actively seek out members of the groups that they felt were Roman Catholic and causing problems and take them away to prisons.