You may have once heard the woomp-woomp-woomp of a helicopter flying overhead. These powerful “flying-vehicles” are also called, choppers, whirly-birds and helos. We depend on them for many things. Read on to discover all about the helicopter. We will be exploring the history of the chopper, what it is used for and much more. So let’s fly to new heights and discover the world of the helicopter.

What is a Helicopter?

A helicopter is a type of airplane known as a vertical takeoff and landing craft (VTOL). It can have a long body or it can be short and compact. The helicopter does not have wings like an airplane. Instead it has long blades or rotors. These are attached to a shaft in the engine. It also has a tail on it with smaller rotors. The pilot uses a foot pedal and two specialized pitch sticks to control the helicopters direction.

Ponder This: The helicopter is the only aircraft that can do what? Find the answer in More Freaky Factoids.

The History of Helicopters

The idea of the helicopter has been around for ages, but it took some time to bring it to be. Check out the long history of the chopper.

Ponder This: In 1982 two men flew around the world in a helicopter. How long did this trip take?

It’s All About the “Lift”

In order for a helicopter to take flight it must achieve “lift.” Normal airplanes have wings that are slightly curved on top and flat on the bottom. This allows the air to flow faster over the top of the wing than the bottom. As the air pushes up from the bottom, the plane is being lifted. However, since helicopters do not have wings, they must get their lift another way. This is where those giant blades or rotors come into play. These “spinning-wings” generate a tremendous amount of air. Once all this air is circulating around the rotors, the helicopter is able to gain the lift it needs to take-off and fly.

Ponder This: Do you think a helicopter can move faster than an airplane?

What Are Helicopters Used For?

You might be surprised at all the things a helicopter is used for. Check out the following list to see which ones you knew.

Ponder This:What far-away planet is NASA studying the helicopter for use on? 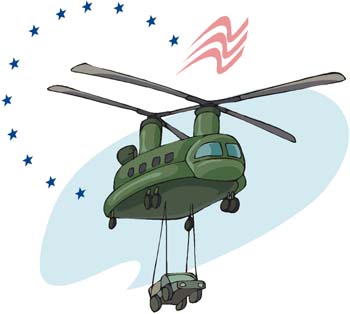 We haven’t whirled past all the fun just yet. Here are the answers to your ponder this questions and more freaky facts. Check it out.

Now that you have learned all these fascinating facts, you can whirl on over to your friends and family and share your new-found knowledge. Who knows? You might just become known as “Captain Chopper.”