Think of all of the wonderful things that we hear every single day. From a tea pot whistling to the birds chirping outside, we are surrounded by marvelous sounds that our ears capture, send inside and are transmitted to our brain. It is the brain that does most of the work in hearing. It translates what is being sent to you so that you can recognize or take action. 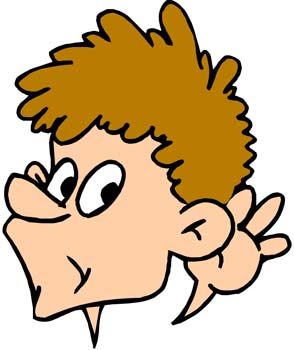 There are three specific parts to your ear: the outer ear, the middle ear and the inner ear.

The middle ear is filled with air on the inside of the eardrum. There are three very tiny bones called the ossicles (oss-ik-uls) or they are also referred to what they look like: hammer, anvil and stirrup. When the sound waves move the eardrum, these are the bones that also move and pass the sound vibrations to a smaller area that is an oval shaped window of the cochlea. The cochlea looks something like a sea shell. The ‘hammer’ is the part that is touching the ear drum so it shakes or vibrates when sound enters. The movement continues through to the anvil and stirrup which touches the cochlea window.

The inner ear contains the cochlea and it is filled with fluid. The fluid moves when vibrations bend tiny hairs that are on the cell lining outside of the cochlea. The hairs are so small that there are around 17,000 of these hair cells on each ear. These hairs are not at all like those that are found on your head. 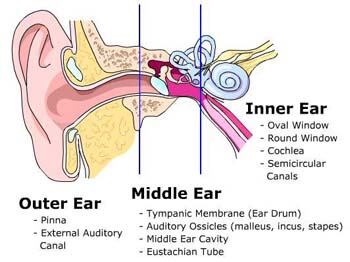 The hair cells are very important as the inner hair cells create a type of signal or electrical impulse that is transmitted to the auditory nerve in the brain.

The outer hair cells are different, as they act like small muscle cells that react to any vibrations in the fluid and then shake and tremble. They are like a high quality amplifier, making any of the vibrations experienced clearer and stronger for the smaller inner hair cells.

After transmitting to the brain through the auditory nerve, the brain takes over to figure out exactly what you have heard.

Another interesting thing to know is that there is also fluid in the semi-circular canals in your ears. The send the message to the brain as to where your head is to that you can stay balanced when you move. The only time you might notice it is if you get off an amusement ride and feel a bit dizzy. The fluid thinks you are still moving around and hasn’t transmitted your new position to your brain.

Your ears are working whether you are awake or asleep. They can’t be turned off.

Your brain has the ability to ‘tune out’ or ‘turn off’ sounds. This happens when you are doing something, like reading, and there are outside noises. The brain switches them off so that you don’t hear them as much. To do this, both ears have to be healthy and each has to work as well as the other.