Wow, the amazing Grand Canyon will certainly make you go ooh and aah if you haven’t seen it yet as it’s perched at the edge of the towering, and extremely high cliffs. This amazing canyon was carved out of the copper-coloured Colorado River. These colourful rock layers have got billions of years of history behind them. 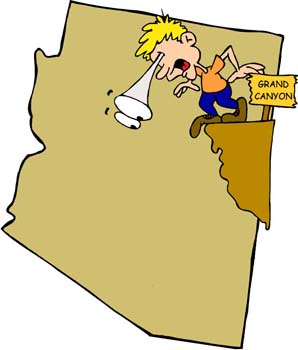 The Grand Canyon is found in the US state of Arizona and it’s thought of as one of the Seven Wonders of the Natural World.

There is strong evidence that suggests that the Colorado River broke out of the west end of the Grand Canyon about 5 million years ago. But because of this, there is a lot of arguing about what it actually looked like millions of years before this happened. Hmmm, wonder if they’ll ever agree?

Some people wonder whether the river carved out the canyon all at once, or whether there was an ancient gorge just waiting for that flow of river to come? Some of those clever researchers did a study not that long ago and they found some rocks at the western end that had been eroded and were then exposed on the surface about 70 million years ago. Wow! And still the arguments continue. Because of this, studies are happening all the time in this natural wonder.

The rock found at the bottom of the canyon is called schist, which is a type of metamorphic rock, which is about 2 billion years old. This rock and sediment stopped gathering about 230 million years ago and it is older than dinosaurs. Whoa! They’ve never found any dinosaur bones in the park, but they have found the bones of an 11,000 year old sloth in the caves, marine fossils and animal tracks too. 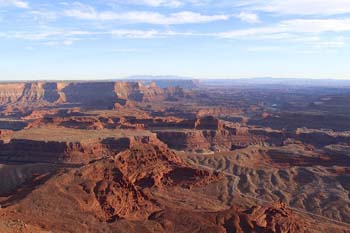 ‘Kaibab’ is the name given to the canyon from the Paiute Indian Tribe, which means ‘mountain lying down’ or ‘mountain turned upside down.’ There is creamy white limestone, called Kaibab, which forms on the surface on which the 5 million visitors per year stand on. It is over 230 million years old. 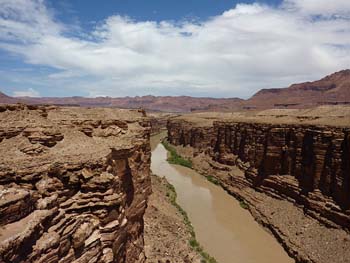 There was a one-armed war veteran called John Wesley Powell. He chartered the course of the Colorado River in 1891 and 1892 in a wooden boat. Wow, that must have been some journey. He was the very first person to use the name ‘Grand Canyon’ and it’s stuck since then.

There’s no doubt about it that the Grand Canyon is awesome, but amazingly it is not the longest or the deepest gorge. Wow!

Its average depth is about 1.6km, though the canyon varies between 731m deep below Yavapai Point on the South Rim, to 2,377m deep at the North Rim. The canyon travels 446km along its winding path.

In 1994, the Guinness Book of World Records crowned the Yarlung Tsangpo Grand Canyon in the Himalayas as the world’s longest and deepest canyon. It is 5,382m deep and 496.3km long. Strange, but true.

At its narrowest part, at Marble Canyon, the Grand Canyon is only 548m across. At its widest, it covers 29km. On average, the canyon is only 16km wide from rim to rim, but crossing by foot it is 33 km, and driving by car is a 403km, five-hour marathon. At least you’ll be seeing some cool stuff. Amazingly, Australia wins the prize for the world’s widest canyon, with its Capertee Valley beating the Grand Canyon by a little more than 30km wide.

There are rattlesnakes found here, but there is one that is rather unusual. It is actually pink, and it matches the rocks. Perhaps it’s decided that it wants to blend in with its surroundings.

There are some super awesome facts on the amazing Grand Canyon. Who would have known that it wasn’t the deepest or the longest? Wow!