Geysers are seriously interesting, and if you’re near one you could get the surprise of your life as they let out a big column of steam and hot water. Read on to find out everything you need to know about these marvels of nature! 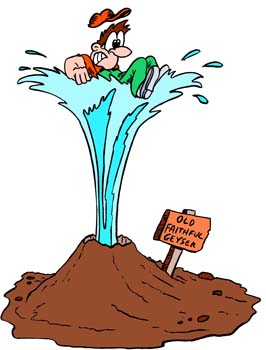 What is a Geyser?

A geyser is kind of like a vent on the Earth’s surface and as we said they will all of a sudden let out a big column of steam and water.

The world’s tallest active geyser is found in Yellowstone. Steamboat Geyser in the Norris Geyser Basin can erupt to a height exceeding 116m.

How do Geysers form?

As we said, there have to be very particular conditions for them to form. They need a combination of water, heat and cracks in the ground, which then forms a kind of underground plumbing system.

The boiling water has a huge amount of pressure behind it, and it then comes back up to the surface through porous fractured rock, which is rock that makes it easy for the water to get through. It also needs fissures, which are a small opening or a crack, and vents as well before it erupts into the air in all its glory!

There are actually two types of geysers. One is the fountain geyser and they erupt in powerful, often fierce bursts from pools of water. While a cone geyser erupts like a steady jet of water from cones of geyserite, which is a variety of opal that’s deposited around some geysers, and these last anywhere from a few seconds through to several minutes. We think a cone geyser would probably be the safest to see!

Did you know that geysers don’t last forever? If those very specific conditions change then they stop working or become extinct. 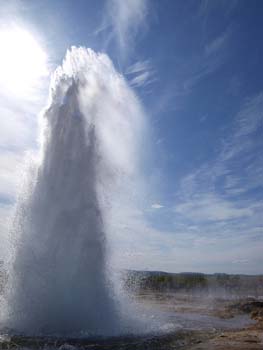 Iceland has some of the most famous geysers in the world. Geysers and hot springs are all over the country. The Haukadalur geyser field is home to the famous Great Geysir, which still erupts, but not very often. The nearby Strokkur geyser erupts every 5 to 8 minutes to a height of about 30m.

The Great Geysir, which we spoke about above, was the first geyser ever to be discovered in 1294.

Now you know everything about geysers, how they’re made, where they are and some super cool facts too! Do you know any other facts about geysers?