Germany has had a very difficult history and has grown out of the disasters to become one of the strongest industrial and economic powers in Europe. It is the second most populated European country, with Russia holding the title of first. Germany has many types of land environments from the fertile northern plains that stretch from the Baltic Seas northward and the central highlands that extend to the Black Forest and then to the Alps in the south. 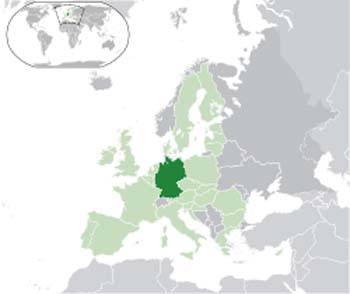 The early years of the German areas were small states that were ruled by kings and dukes. There was a lot of fighting and arguing as each tried to take power from the others.

Julius Caesar, the emperor of Rome referred to the people that lived in the area that was East of the Rhine River as ‘Germania’ so that they could distinguish it from the area of Gaul that they had conquered.

In 1517, Martin Luther led the reformation against the Roman Catholic Church and those in the northern areas of the country became Protestants, while people living in the southern areas remained Roman Catholic.

At the end of the ‘Thirty Years War’ (1618-1648), Germany was divided into a number of sectors: Bavaria, Saxony and Prussia.

Once the Napoleonic Wars ended, the area known as Germany began to grow and become successful with the Industrial Revolution. The areas that had been separated became unified and Germany became a center for science, music, arts and humanities.

It took until 1871 until the country was actually united through an alliance of a politician by the name of Otto von Bismarck.

By the time the later 19th century rolled around many of the European countries were making attempts at developing colonies in Asia and Africa and Germany was in competition with them.

Germany became a world power that competed with Great Britain’s by 1900 and they led the Central Powers in the 1914-1918 World War I, fighting against Great Britain, Russia, France and then the United States. The loss of the war forced Germany to sign the “Treaty of Versailles” which required that they pay war reparations and would be stripped of their colonies, Alsace-Lorraine and areas of Poland.

The German monarchy was demolished in the German Revolution of 1918-1919 and they established the Weimar Republic which was a parliamentary democracy that was quite unstable.

The 1930’s brought about the Great Depression around the world and Germany, already in great debt from the repayment of war costs, fell into disarray and despair. The people were looking for someone or something to help to bring them back to their former glory and that is when Adolf Hitler entered the scene.

Hitler and the Nazi Party rose to power in 1933 with promised to build Germany to her former greatness. His troops invaded Poland, which started World War II, creating death camps where millions of Jews were murdered as well as anyone that went against Hitler’s concept of government and his idea of the ‘pure race’.

Many of the countries became allies to fight against Hitler and the war finally ended in 1945.

Post WW II allowed Germany to be divided into East (communist) and West (democratic) as part of the settlement with the Soviet Union as an ally. A wall was built to separate the two parts of the country. Many of the factories were dismantled by the Soviet Union and rebuilt in Russia (with little success). The United States brought many of the German scientists to America to work on scientific and space/rocket programs.

Germany was the center piece for the ‘Cold War’ between the Soviet Union and the Western countries. This lasted forty four years until 1989, when the German wall was torn down and the Cold War ended.

The two sides of Germany blended back into a single country and worked to regain their place as a powerful country. They joined the European Union and are one of the strongest European countries today.

The high level of German interest in environmentally friendly technology has allowed some of their manufacturers such as Transrapid (the railway that is maglev) and Nordex (wind turbines) to be well-known and adopted on a global scale.