If you’re keen on seeing animals or plants not found anywhere else on the planet then the Galapagos Islands are the place for you. These animals are amazingly not scared of people either, so you’ll be up close and personal. You’ll be able to go out into the Pacific Islands and experience this marvel of nature! Read on for more information on the Galapagos Islands. 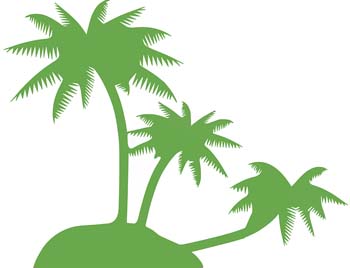 History of the Galapagos Islands

The Galápagos form an archipelago, which means a large group of islands, of 18 major islands and loads of smaller islands.

The islands came out of the deep dark depths of the ocean about four million years ago after volcanic activity on the ocean floor. At first they were barren mounds of cooled lava. Over time, and lots more volcanic activity, these little mounds grew to what they are today, and guess what? They’re still growing! Wow. Maybe if you visited there, you could watch them grow!

In 1535 these amazing islands were discovered by Panamanian bishop Fray Tomás de Berlanga while he was sailing away to Lima, Peru.

Many years later, Abraham Ortelius named them Galápagos because of the saddle-shaped shell of the giant tortoises that live there. In Spanish, ‘galápagos’ means ‘saddle.’

After that absolutely nothing happened. For hundreds of years the islands stayed abandoned, except for pirates of course, whalers, and buccaneers who used them as hideouts. In 1832, Ecuador claimed the islands and in 1959 declared them a national park.

Where are the Galapagos Islands?

The Galapagos Islands as we said are a volcanic archipelago which belongs to Ecuador, which is nearly 900km miles west of its mainland.

The Galapagos go right across the equator line and are in the Pacific Ocean. 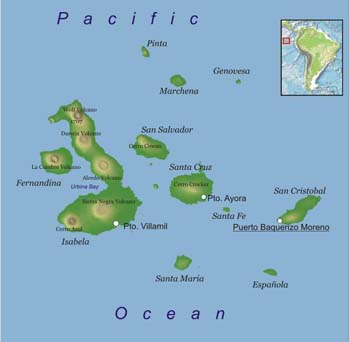 There are 18 main islands, 3 smaller islands, and 107 islets or rocks. The largest of the islands is Isabela and it makes up nearly three-quarters of the total land area of the Galapagos Islands at 5,827 km². That seems like the right island to visit when you go there.

Only five of the islands have people living on them; Baltra, Santa Cruz, San Cristobal, Isabela, and Floreana.

Floreana was one of the first islands to have people live there, and since the 18th century whalers have dropped their letters off at its ‘post office’ which really isn’t a post office at all. It’s actually a wooden barrel!

How Did the Galapagos Islands Get Started?

It’s quite unbelievable to think that as this archipelago is so far from the mainland that any plants or animals even live there at all. How did they reach the island? It started with a very small thing!

Bacteria and the spores of ferns, mosses, algae, and fungi plants arrived first. They were literally blown in by the wind and these tiny little things were perfect to live in places without much soil. But once they got bigger, so bigger plants grew. The seeds for these larger plants probably came from the stomachs of bird’s crossing over. There is a coastal plant, which is like a mangrove that grew from seeds that literally floated to the island. How awesome is that?

There are absolutely heaps of plants here, but not many of them are large flowering plants. The islands won’t allow these flowers to grow because of what they need to grow.

What lived on the Island before humans came?

There are absolutely humongous tortoises on the islands and can you guess how they arrived there? Well they actually floated on the ocean currents. A lot of these tortoises weigh over 270kg and live to be over 100. If you’re about 10 you might way about 30kg. That’s about 9 times your weight; for a tortoise! Wow.

Iguanas and other small animals possibly latched onto tree trunks or other natural rafts and followed the currents as well. They can grow to just under 1m long and weight more than 70kg. That is unbelievable for an iguana!

There are seven species of lava lizards which are about 0.3kg, but good luck in finding a frog of other amphibian here…they don’t exist. That’s so weird.

You also won’t find any mammals as they certainly wouldn’t be able to take the scorching heat from the journey or the long periods where animals have go without food. But reptiles can.

There’s a cute little fellow called the Galapagos penguin, and he’s one of the smallest penguins in the world, and has been the only animal to cross the equator into the Northern Hemisphere! They would be cool to see. 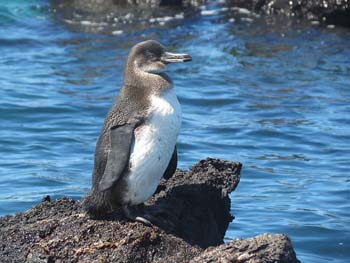 You also get sea lions as well as whales and dolphins.

There are seriously bright crabs called Sally Lightfoot crabs and they are everywhere, as they scuttle along on the rocky shores.

There are 13 species of gorgeous finches. They’re called Darwin’s finches, and they played a big role in Charles’s Darwin’s theory of evolution. We’ll get to that soon.

In 1835, Charles Darwin, a 22-year-old British naturalist, someone who studies natural history, spent five weeks on the Galápagos Islands. He didn’t realise it at the time, but what he’d seen and the specimens he’d collected would change science forever.

He took back samples of finches from the islands. At first, he thought the birds were different species, such as wrens and blackbirds. But then two years after Darwin’s return, famed ornithologist, a person who studies birds, John Gould took a good old look at the specimens. Gould actually told him that they were not different species, but were all part of ‘an entirely new group’ of birds that had 12 subspecies. Wow! 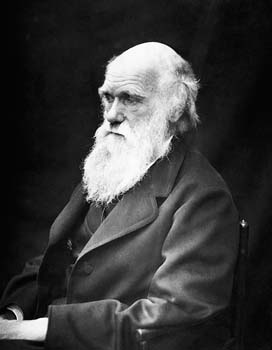 The original birds probably arrived on the islands after being blown off course by strong winds, like loads of other species. Once there, the birds on different islands were cut-off from each other. Over time they all changed, in order to survive in their environment.

The main way that they changed was in the shape of their beaks. On an island where nuts were everywhere, the birds’ beaks became shorter and stronger, so they could crack the shells easier. Birds on other islands had thinner, finer beaks to pick insects out of trees. Overall, the finches’ beaks changed depending on the food available in their neighbourhood.

But Darwin didn’t stop there; he carried on studying the finches as well as other animal specimens. After many years, he developed the theory of evolution. In 1859, Darwin explained the idea in his now-famous book, The Origin of Species.

Fame arrives for the Galapagos

So now you know how this group of islands formed, and how they’ve become as famous as they are today! We’d love to visit, would you?