You have probably seen fire at one time or another. It could have been a small one like on the end of a candle or a big bonfire at a campground.

You may have also noticed the flames from the fire were orange and yellow in color and were very hot if you got too close to it.

But did you know, fire needs fuel, oxygen, and heat to burn? Or what we see as fire is actually a chemical reaction that releases both heat and light? 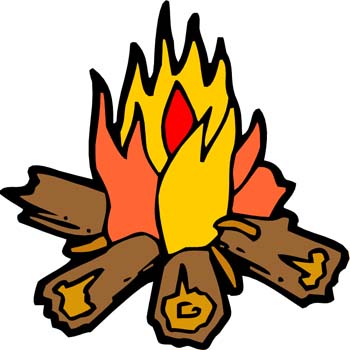 Oh No! The Forest is on Fire!

Forest fires are also known as “wildfires” and can be very dangerous. When a fire starts in a wooded or grassy place it spreads very quickly. This is because these areas are most often very dry, which is the perfect fuel for fire. This type of fire is most often caused by humans (not putting out a campfire properly or dropping a lit cigarette). However, some wildfires can be caused by a bolt of lightning or even from volcanic eruptions.

Although, forest fires are scary they do have a good side to them. When a fire sweeps through a dense forest it will burn up all the debris that has collected on the ground. This helps enrich the soil so new trees can grow.

Freaky Fire Factoid: to stop a fire in hard-to-reach areas, a special aircraft is used. It can contain thousands of gallons of water or even an unique firefighting gel. Once above the fire, the aircraft releases its cargo. It may have to do this several times before the fire will be out. 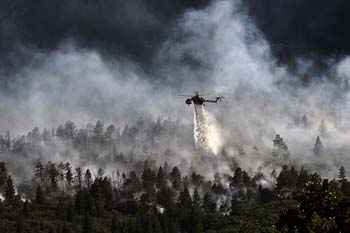 The Ferocity of Fire

Fire will produce a searing heat that can quickly burn up objects, including our skin. Check out the ferocity of fire.

Even a small candle flame will burn at 1,800 degrees Fahrenheit (1,000 degrees Celsius).

It can take as little as 2.5 minutes for a home to be entirely engulfed in flames.
Firefighters have to wear special gear to protect them from the heat and flames of a fire. It is called, Bunker Gear and is made from several layers of specially design, flame-resistant material.

Diamonds are formed when a carbon compound is put under extreme pressure and extreme heat. And when we say extreme heat we mean around 2,200 degrees Fahrenheit (1,204 degrees Celsius).

Freaky Fire Factoid: Coal located underground in Australia (Burning Mountain) has been burning for over 6,000 years.

We just learned about a 6,000 year-old burning fire, but did you know there is a fire that never stops burning and has been doing so since the dawn of time? It’s the Sun.

The Sun is essential to all life on Earth. It grows our plants, warms our bodies and makes going to the beach so much more fun. The Sun is made up of 75 percent hydrogen, 24 percent helium and small amounts of carbon, iron, neon and, of course, oxygen. All these elements combined make for one mighty fire! In fact, the Sun burns on the surface at 9,941 degrees Fahrenheit (5,500 degrees Celsius). But that’s nothing compared to its core. The center of the Sun burns at a whopping 24,480 032 degrees Fahrenheit (13,600 000 degrees Celsius)!

Freaky Fire Factoid: A Solar Flare can produce the energy of millions of 100 megaton hydrogen bombs!

What We Do With Fire

Fire has been around for millions of years, but it has only been in the last 1.5 million years that humans have figured out how to use it. Check out all the things we do with fire today.

Fire is used for;

We haven’t burned up all the fun facts about fire just yet. Here are some more freaky fire facts you can ignite your friends and family’s fiery curiosity with