Low Countries are an area of Northwestern Europe that include a number of countries: Belgium, the Netherlands, and the Grand Duchy of Luxembourg. The name ‘Low Countries’ doesn’t relate to anything historical, but more on the political side as it refers to the geographic areas. This area has been the center of many battles and in both the medieval and modern times, was the wealthiest areas of Europe. 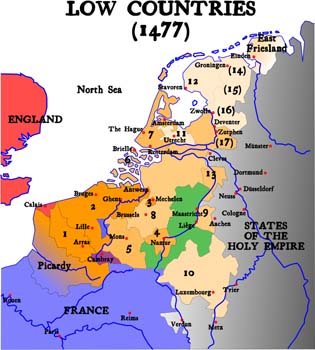 The area known as the Low Countries were conquered by the Romans in the First Century BCS and remained under their rule until the 5th Century CE. At that time, it became part of the controlling area of the Franks.

The Frankisk Carolingian Empire collapsed around the mid-9th century and it allowed multiple political units to occur in the various countries. This included the duchy of Brabant, the county of Flanders, the county of Holland and the bishopric of Liege.

The ruling factor of the house of Habsburg in the 15th and 16th centuries brought about some stability but was then broken during a revolt in 1568 by the mostly Protestant northern provinces, forming the Dutch Republic and the United Provinces. These united provinces became some of the greatest political powers in Europe.

Most of the Luxembourg history included the fact that it was a principality of the Holy Roman Empire and it was established as a grand duchy in 1815 to be ruled by the kings of the Netherlands. In 1890, this established union ended.

World War I brought about a change for each of the countries as the Netherlands tried to remain neutral and Luxembourg and Belgium were under the occupation of German forces.

In World War II, all of the Low Countries were taken over by the German Nazis, however, after the war each of the three countries decided to give up their concept of neutrality and were part of the founding members of NATO.

The Low Countries are named this due to the fact that most of the land inland and along the Northern seacoast it either at or below sea level; some areas are just a bit above sea level.

The importance of trade is of such a priority that the union allows for free movement of people, capital, goods and services between the three countries through a Belgium-Luxembourg Economic Union that was formed in 1921. The agreement coordinates policies in financial, economic and social fields as well as pursues policies in common foreign trade.