Elephants are the largest land mammal on earth and are known for their stocky build, long trunks, wide legs and floppy ears. 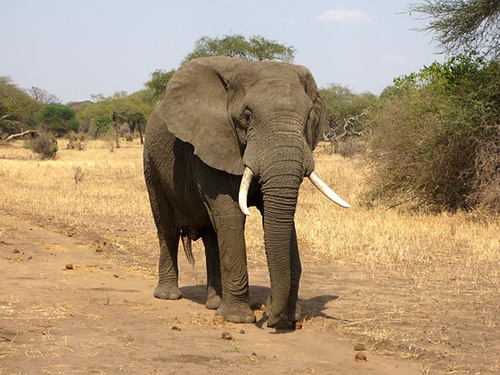 What do you call a baby elephant?

A group of elephants that are together are called a herd. 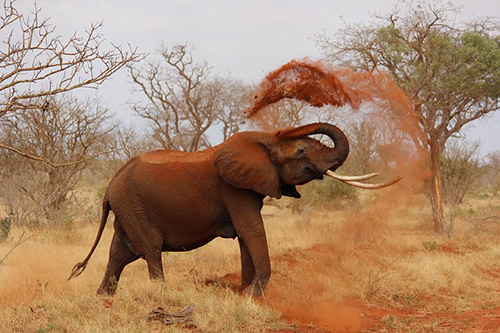 What do elephants eat?

Elephants eat vegetables. They usually eat between 200-400 pounds of food each day. Almost the whole day of an elephant is spent eating food and this is up to 80% of their day.

Elephants eat things such as fruits, bark, grasses, plants, roots and bushes. They eat a lot of things that contain calcium so that they can digest the food better.

If an elephant is lacking any vitamins or minerals or salt, it will use its tusks to dig around in the mud and then it will eat the soil. This allows them to get vitamins and minerals that are in the ground. Some elephants that live close to volcanoes will sometimes lick the mountainside in order to get more salt into their diet. 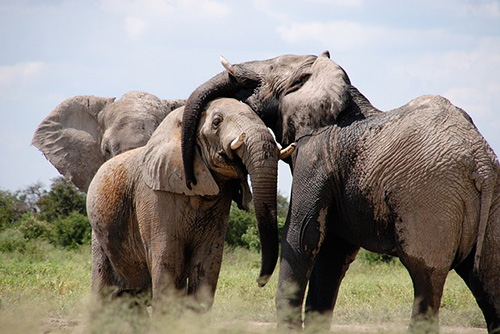 What do elephants drink?

Elephants drink water. As a matter of fact, an adult elephant can drink up to 55 gallons of water each day. They can drink this water faster than 5 minutes. 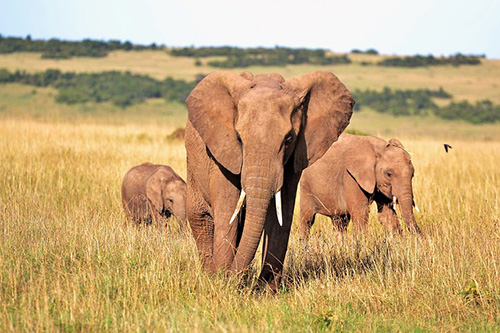 The idea that elephants ate peanuts happened in the 19th century when people would come to the circus and be able to buy peanuts to feed the elephants. Even though this was a thing that was happening, it is now known that feeding an elephant peanuts is not healthy for them.

Elephants need to eat food that is good for them because they have over 40,000 different muscles and can weigh over 250 pounds. 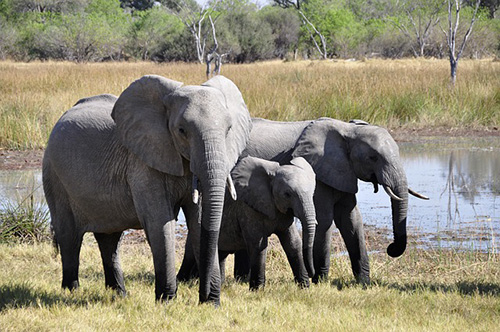 Do elephants sleep standing up?

Most elephants that are in the wild will sleep standing up. They usually only lay down to sleep every third or fourth day of the week and this is only for around an hour or two.

When elephants are in the zoos, they are often seen sleeping laying down and this is true. They spend much of their time laying down and only sleep standing ever once in a while.

An elephant uses their muscles so they can have REM sleep and so when they have this type of sleep, they have to lay down. This causes their muscle tone to change and they cannot really stand during this time unless they have something to hold them up. The REM sleep is very important because it allows their memory to rest and elephants have a good memory so need this REM sleep.
Some elephants will go for days without sleeping. Their sleep depends on the environment and not if it is daylight or dark outside. 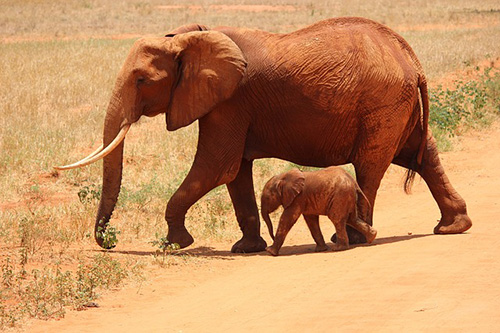 Do elephants sleep with their eyes open?

Elephants sleep with their eyes clothes. Most mammals that have eyelids will close their eyes when they sleep. Since an elephant is a mammal, it sleeps with its eyes closed when it sleeps.

Other animals such as snakes, insects, crabs and fish all sleep with their eyes opened. 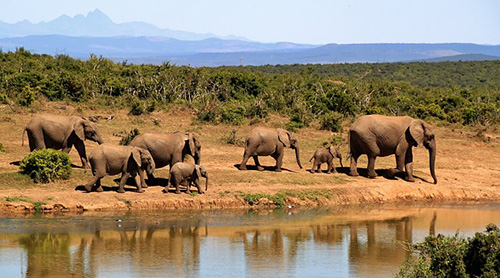 Why are elephants endangered?

Some elephant species such as the Sumatran elephant are endangered. There is an estimate that there are over 400,000 African elephants that are found in Africa alone. The amount of elephants has declined up to 50% in the past few decades and they continue to decline.

Many of the reasons for the decline of elephants is that people hunt elephants for their ivory trunks and tusks. There have been many laws that have been set to stop poaching in south Africa but there have still been a lot of elephants that have died before these laws.
One restriction that has been set is the ivory restriction. This means that anyone that has ivory from killing an elephant will have illegal items and could face fines and jail time.

It is estimated that over 20,000 African elephants were killed in 2013 from poachers. When elephants are killed by poachers, it causes herds of young elephants to be left without being able to find water or food sources. This causes them to die off faster.

Another reason that elephants are endangered is due to their loss of habitat. When elephants migrate and have to find new homes, it can cause them to die and not to be able to find enough food. This happens when homes and businesses are built in habitats where the elephants live.
Farmers and citizens sometimes shoot and kill elephants because they are so large and can be a threat to their gardens and to their properties. 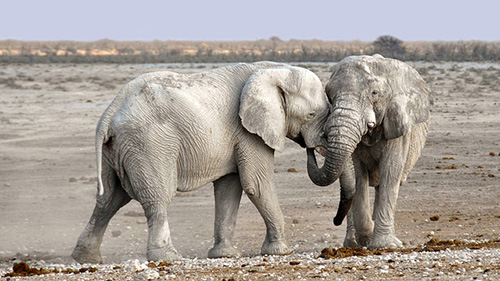 Why are elephants afraid of mice?

Elephants are not really afraid of mice themselves, they are just afraid when mice jump out or nibble on their feet or trunks. This can surprise the elephant and make them to seem fearful when it is just the element of surprise that gets them.

The myth of elephants being afraid of mice goes back to ancient Greece when people were telling stories about mice that would climb on elephant trunks and would cause them to go crazy. Some of the stories started with the guy called Pliny the Elder and it was as early as A.D. 77.
Elephants have bad eyesight so when a mouse runs by, the elephant can’t really see what is running by it and it gets scared. Elephants are sometimes nervous around small and fast animals.

The story of Dumbo helps us to believe that elephants are afraid of mice, but really this isn’t true. 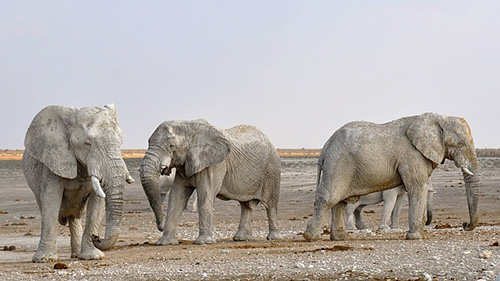 Why are elephants’ ears so big?

Elephants ears are so big because they help them to reduce their body heat. Since elephants cannot sweat, like humans can, they have to have a way to cool down. An elephant is so big that it makes a lot of body heat.

Having big, floppy ears can help the elephant to be able to use their ears to fan themselves. Elephants will flap their ears back and forth to create a breeze that can cool an elephant down like standing in front of a big shade. Besides that, inside the elephants ears are tiny blood vessels and the skin is very thing. When the elephant’s blood temperature gets higher than the surroundings, the heat is released through the ears. 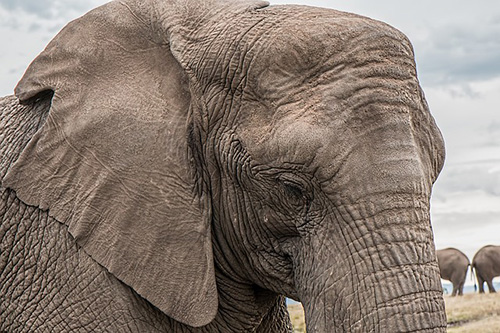 Why are elephants hunted?

One restriction that has been set is the ivory restriction. This means that anyone that has ivory from killing an elephant will have illegal items and could face fines and jail time.

It is estimated that over 20,000 African elephants were killed in 2013 from poachers. When elephants are killed by poachers, it causes herds of young elephants to be left without being able to find water or food sources. This causes them to die off faster. 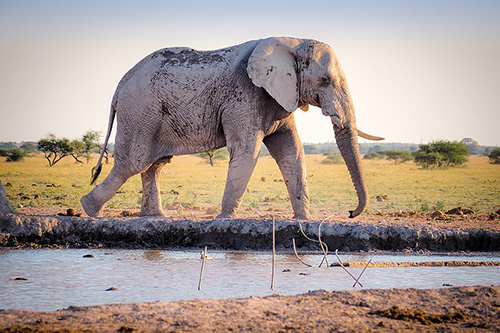 Elephants can’t jump because the bones inside of the elephants legs are all pointed at a downward angel. This means that they don’t have any spring that can allow them to push their body off the ground. Even when an elephant runs, at least one of its legs are always on the ground.

Much of this might have to do with the fact that the animals are so large. If an elephant were to leave the ground, they would probably get injuries because they need flexibility and speed in order to be able to jump. 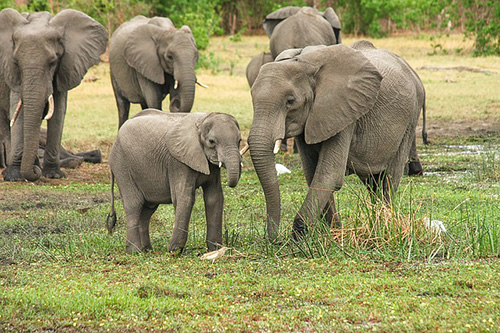 Why are elephants pregnant for so long?

An elephant is pregnant for 680 days because baby elephants are born with high levels of brain development and it takes them longer to develop than other mammals.

An elephant can be pregnant for 22 months and they are considered the animal with the longest gestation period of any mammal. 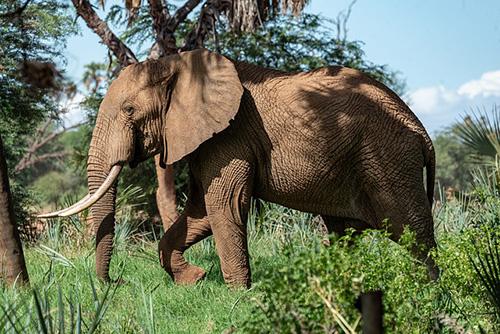 Why is an elephant called a herbivorous animal?

An elephant is called an herbivorous animal because it only eats plants. Some people believe that elephants have less choices in what they eat because of their size and what plants it can consume when the seasons change.

When the season is wetter, it can get 30% of its food form the wood species and when it is hot and dry, the elephant has to eat shoots and leaves and bark.

Most elephants concentrate more on eating the roots and the bark of trees over eating any type of fruit or other plants that might have different tastes.

Elephants and other animals that only eat plants have a hard time getting enough nutrients such as vitamins and minerals, so they have to eat a lot of plants to make sure that they get the nutrients that they need. 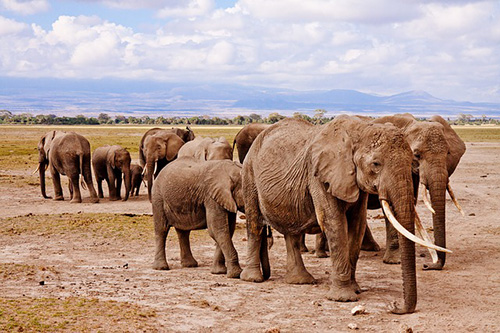 What do elephants need in their habitat?

Most elephants live in the grasslands, forests or savannas where they can get more food. They need to be able to live in an area that has grasses and plants that they can eat. Many animals eat tree bark so trees play a huge role in where they choose to live. Some do live in deserts and swamps and in areas of tropical highlands.

The elephant can weigh even up to 9 tons and can stand 13 foot tall, so it is a very large animal and it needs a lot of water in order to survive. Depending on the area that they live, some animals migrate in hopes to find food. During this time, they know the different routes to take that allow them to have water that they can store . 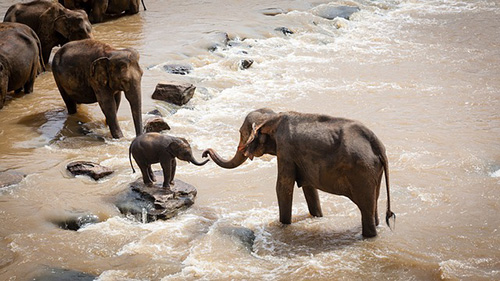 What do elephants have tusks for?

Elephant tusks are used for many things such as lifting things, getting food, fighting, defending themselves and their area and to be able to take the bark off of trees to eat.

Sometimes, when there is a drought, the elephant will use its tusks to dig in the dirt until they are able to find water.
The tusks are sometimes even called teeth because they are large incisors that are made from the product of ivory. Both the male and female elephant have tusks. Most female elephants have smaller and thinner tusks while the males have larger tusks that they use to protect themselves and to survive.

The tusks do have to do with animal genetics and most tusks are passed down from generation. This is why some elephants have small tusks and some have large ones. 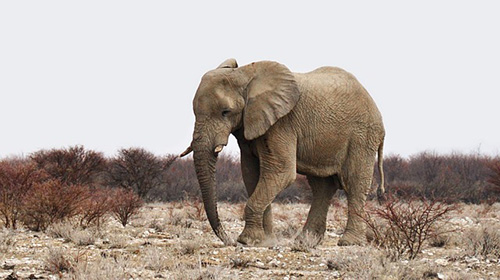