From your clothes, to your hair to your school bags and more, every single bit of matter is made up of tiny, tiny little particles called atoms, which are like little groups of electricity. Atoms have negatively charged electrons, which is like a tiny little piece of electricity, which spins around them. Most of the time, these electrons all spin around like crazy in random directions. But sometimes they decide to all work together and spin in the same direction, and when this happens they create an invisible force that’s known as magnetism. 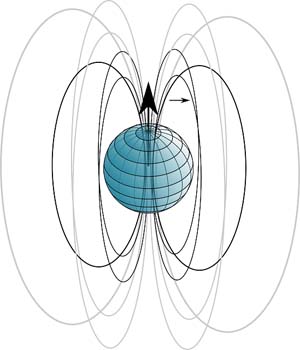 In order for you to understand the Earth’s magnetism, it’s helpful to understand how magnets work. You must have played with them to see what they do. They’re quite surprising. Do you remember when you first learnt that two magnets could snap together and stick like glue? Remember the force when you held two magnets close and felt them pull toward one another or push away from each other? Well let’s get on with understanding more about magnets! 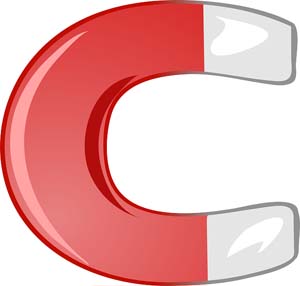 Here’s a way to picture a magnetic field. If you put a bar magnet, which is shaped like a rectangle, or a horseshoe magnet onto a table and place an iron nail nearby, what do you think will happen? Well if you push the magnet toward the nail, there will be a point where the nail jumps across and sticks to the magnet. That’s what we mean by magnets having an invisible magnetic field that spreads all around them.

Magnets have a magnetic South Pole and North Pole. If the same poles of two magnets are put next to each other they will push away, but if the different poles are placed together they will pull together.

Magnetic objects must be inside a magnetic field to either pull away or push together, so this is why you will sometimes have to move a magnet closer so that something happens.

The Earth’s core is apparently a mix of iron and nickel, which of course gives the Earth it’s very own magnetic field.

Earth’s magnetic field goes way out into space, in a region called the magnetosphere, and can affect things around it. When energetic particles zooming in from the Sun, called the solar wind, mingle with the Earth’s magnetic field, we get amazing auroras in the sky, just like the Northern Lights or Aurora Borealis and the Southern Lights or Aurora Australis.

The North Pole of a magnet points roughly toward Earth’s North Pole and the same happens for the South Pole. That’s because Earth itself contains magnetic materials and behaves like a gigantic magnet.

What about other stars and planets? Do they have magnetism too? Well the Sun has a magnetic field several times stronger than Earth’s, but the Moon has no little or no magnetism. The other planets have magnetic fields too. Saturn, Jupiter, Neptune, and Uranus have fields stronger than Earth’s, while Mars, Mercury, and Venus have weaker fields. Wow, that’s interesting.

Magnetic compasses use the magnetic field from the Earth to help people move in the right direction.

The Earth is like one massive magnet. The North Pole and the South Pole are highly magnetic.

The magnetic force of the Earth isn’t all that strong. Magnets on your fridge have an even bigger magnetic force. That’s unbelievable!

A collapsed star, which is known as a neutron star, has the strongest magnetic force out of any object in the entire universe. That’s crazy.