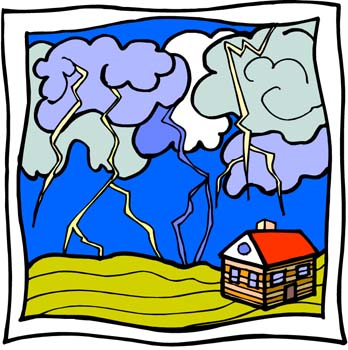 No matter where you live, though, chances are the weather can be very dangerous at times. Let’s look at a few of the most dangerous types of weather and how to protect yourself from them.

Lightning is very dangerous—it’s electricity on the loose! Lightning:

See it and hear it

We know what lightning looks like, but did you realize you can also hear lightning? Well you can! Thunder is the sound lightning makes.

EXAMPLE: If it takes 15 seconds for the thunder to sound after you see the lightning, the storm is 3 miles away. (15 divided by 5 is 3).

How to stay safe

Protect yourself from lighting by staying inside during a storm. If you are caught outside in a storm, get out or away from the water as quickly as possible, do not take cover under a tree of under a metal roof.

What is a tornado

A tornado is a funnel or tube of rapidly spinning air that acts like a giant and violent vacuum.

Tornadoes form when the cold air and warm air from a thunderstorm mixes together and get caught in the storm’s winds when they are changing direction. The mixed air temperatures combined with the air spinning in opposite directions causes the funnel which is the tornado.

While tornadoes can happen almost anywhere in the world, the United States has more tornadoes than any other place in the world—about 1,200 each year. Most of these tornadoes hit in what is called ‘tornado alley’; the states of Missouri, Oklahoma, Kansas, Texas, and Iowa.

How a tornado’s speed is measured

The Fujita scale is used to measure the severity or seriousness of a tornado. An F1 is a small tornado, and an F5 is the most dangerous. 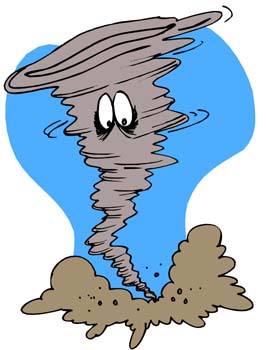 If you are in a storm and a tornado is possible, stay inside and listen to the television or radio for weather updates that will let you know if a tornado forms in your area. If one does, go to a basement or a room of your house with no exterior walls (rooms with windows or doors that lead outside). A bathtub or a closet is usually safe. Also, stay away from all windows and heavy objects that can fall over on you.

You should also have a survival kit to help you in case of an emergency. The kit should contain a flashlight, water, basic first-aid items, protein snacks and your wallet with identification and medications you take every day, a change of clothes and a blanket.

Tornadoes are very dangerous and kill hundreds of people each year. They can move building off their foundations, carry large trucks miles away, and pull tiny pieces of paper into trees.

Hurricanes are a lot like tornadoes. The difference is that hurricanes happen in the ocean and move onto land. They are dangerous and destructive in the same way a tornado is.

Hurricanes involve both wind and water; making them very powerful and very dangerous.

Hurricanes are most likely to form at certain times of the year—usually between the months of April and November.

To protect yourself against a hurricane, get as far from the water as you can. If that means leaving your house, then that is what you must do. You should also board up the windows of your house and have an emergency survival kit.

A flood is a sudden surge of water that happens when the rain falls faster than the ground can absorb it.

Floods are very dangerous because the water in a flood is constantly moving and washing away things in its path. Moving water is very powerful. The rushing waters of a flood can carry cars, trucks and houses away. Flood waters can uproot trees and carve deep ditches in the ground.

If you are in an area where there is flooding, you need to remember to stay OUT of the water. There can be undercurrents in the water even if it looks calm and you never know what may be under the water.

Staying out of the water also means you should never drive or ride in a car or truck into the water.