Cucumbers are members of the melon family. This means cucumbers are actually a fruit instead of a vegetable. Cucumbers are green and are shaped like a tube.

How to grow cucumbers

Cucumbers are grown from seed. The plants are vines that spread out along the ground. The vines get little yellow flowers on them called blooms. The blooms then grow into cucumbers. It takes almost 3 months for cucumbers to be ready to pick after planting the seeds in the ground.

Cucumbers need moist soil and plenty of warm sunshine to grow. If the soil is too dry, the cucumbers will be bitter.

All cucumbers are not alike

The thick skin of a cucumber makes it harder for bugs to eat, so cucumbers are not usually bothered by bugs. The plants aren’t so lucky, though. People who grow cucumbers need to check for bugs on the plants almost every day and must kill the bugs quickly so they do not destroy the plants. 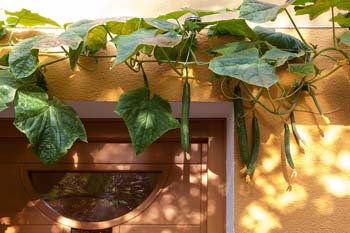 What are cucumbers used for

Cucumbers are eaten raw—without the peeling. You can eat them in salad, on sandwiches, or by themselves. Some people like to put salt or vinegar on their cucumbers…or both. The smooth-skinned cucumbers

You cannot cook cucumbers, though. They turn to mush. YUK! 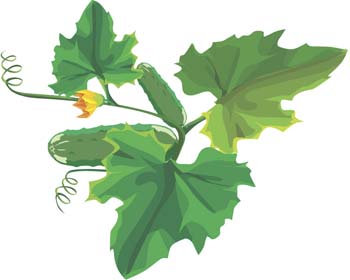 Taste a cucumber with smooth skin and one with bumpy skin. Which do you like better? How are they different? How are they the same?