Crocodiles are a reptile that are found in many areas around the world. They, like the alligator, are believed to be decedents of the dinosaurs. 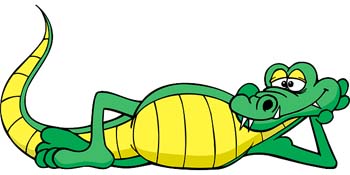 Crocodiles come in a variety of sizes. The biggest is the saltwater crocodile which can be seen from Fiji to Northern Australia and India. It can get as large as 7 meters (23 feet) in length and weigh as might as 1 ton.

The term ‘to cry crocodile tears’ is an expression that means to show fake sadness. It is believed that the origin of the myth began when the reptiles were crying when they were eating people. There is a truth to this but it is based on physical reasons. The crocodile eyes bubble and froth when they are feeding due to air being pushed through the sinus areas. This mixes with the tear glands and ends up looking like tears. 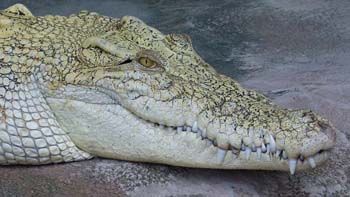 The value of crocodile skin has launched a lot of poaching and there are 23 species of crocodiles and crocodile relatives that are threatened.

Crocodiles don’t chew their food. Their 24 teeth are sharp and designed to crush and grab. Instead, they swallow stones that helps to grind up the food inside their stomachs while the stones also act as ballast while they are in the water. 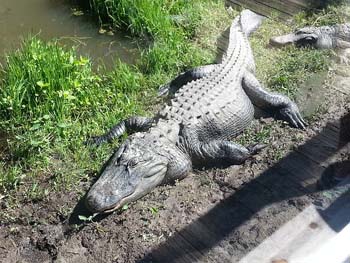 Even though a crocodile has a dangerous looking mouth, they are also very delicate. A mother crocodile can gently remove her babies from the nest with her mouth.