Ever heard of craters? Do you know what they are and how they are formed? Well read on, and we’ll give you all the info you need to be crater smart.

What is a crater?

A crater is like a big hole in the Earth’s crust, and some of them can be very, very big indeed.

How is a crater formed?

There are meteors flying around the Earth all the time and they are pieces of flying rock, metal or debris from space.

When a meteor crashes into the Earth, it has a lot of energy, and this is often turned into heat. This heat is so intense it can melt rock and then as it does that so a hole is made in the Earth’s crust. Wow, they must come hurtling down here at some speed.

Did you know that scientists believe that a meteor may have caused dinosaurs to become extinct as well as other plants and animals? That must have been one massive meteor.

What type of craters do you get?

Impact craters are made when there is a big crash of a meteor with the Earth. They come crashing down at high-speed and a large meteor will force a wide area of rock down. The pressure crushes the rock. Straight after the collision the crushed rock ricochets. Massive amounts of shattered material hurtle upward, and a wide circular crater forms where the rock once was.

One of the most well-known craters on Earth is Meteor Crater, which is near Winslow, Arizona. The crater was created instantly when a 50m, 150,000 ton meteor slammed into the desert about 50,000 years ago. Meteor Crater is 1.2km wide and 175m deep. Wow that’s massive.

Volcanic activity can often cause craters. Some volcanic craters are deep and have steep sides. Others are wide and shallow.

Craters at the top of volcanoes are called summit craters. Summit craters are where volcanic material is at or near the Earth’s surface. Volcanoes may have one summit crater, such as Mount Fuji in Japan. Or they may have several. Mount Etna, in Italy, has four. Wow! 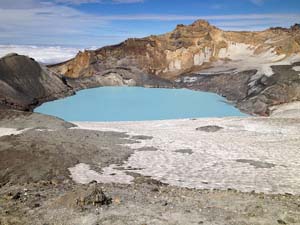 Volcanoes can also create craters when the magma comes into contact with water. Magma flowing or bubbling beneath a volcano can sometimes mingle with groundwater that’s close to it. When this happens, a small explosion happens and a crater forms around the explosion. This type of volcanic crater is called a maar.

Often, a maar will fill with water and become a shallow crater lake.

Another of crater is caused by an explosion. When materials or chemicals explode, the explosion removes all the material around it. The debris often lands in a circular pattern around where the explosion happened, and a crater is born.

The Barringer Crater in Arizona is almost 1.6km wide. It was formed when a nickel iron meteorite about 46m wide hit the area about 50,000 years ago.

The Spider Crater in Kimberley Plateau in Western Australia actually looks like a spider. How cool is that. It was made about 600 to 900 million years ago and is nearly 13km wide.

The Manicouagan Crater in Quebec, Canada is nearly 97km wide and was made 212 million years ago. Wow, that’s unbelievable.

So there you have it…all you need to know about craters. Why not take a marble and throw it into some sand and see what happens? You’ll create a crater right in front of your eyes!