Coal is so much more than just something Santa leaves for naughty kids.

Coal has been around for hundreds of thousands of years.

Today, we use about 5.3 billion tons of this black stuff each year.

But did you know it also takes millions of years to produce coal?

Or that coal is considered a “dirty” energy?

Let’s explore the world of coal to see what other sooty facts we can uncover. 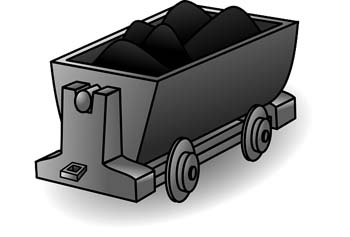 The History of Coal

The history of coal dates as far back as 100 B.C. with the Chinese; however the Romans and Greeks also used this element.

Several decades later in the year 1200, a monk wrote about a black substance found deep below the surface of the ground.

It was being used by metal workers.

As time passed, people began to realize the value of coal.

In 1748, this element was being mined in the United States (near Richmond Virginia).

A few years later, coal was being found in Kentucky, Ohio, West Virginia and Pennsylvania.

In 1788, a type of coal called, Anthracite, was being used to make nails.

Once the steam engine was introduced the value of coal went up even further. These powerful vehicles used coal for fuel.

In the early 1800’s people realized that coal could produce electricity.

In fact, Baltimore was the first city ever to power their street lights with the gas that coal produces.

He developed an electric generator that burned coal to make electricity.

This machine was first introduced and used in New York City – it gave power to the entire city!

By 1925, coal was being used to generate around 70 percent of America’s energy.

That’s a lot of coal-power!

However, once the 1960’s rolled around, people had discovered a better and cleaner way to fuel their needs (petroleum) so the coal production began to die off.

Where on Earth is Coal Found?

Coal is found under the ground in “coal beds.”

It is considered a sedimentary rock and is black or brownish-black in color.

It is specifically found in rock strata and appears in layers or veins.

These are known as coal beds or coal seams.

The hardest form of coal is called, anthracite coal.

This happens when the coal goes through a metamorphosis caused by extreme pressure and high temperatures.

What is Coal Used For?

You may be surprised to learn all the uses of this important element.

Check out the things Coal is used for;

The Not-So-Nice Side of Coal

Although coal has its many great uses, it can also have some harmful effects.

Remember earlier when we mentioned it is considered a “dirty energy?”

This is because when coal is burned it releases a chemical known as, C02 (carbon dioxide).

This is the main cause of global warming. In addition, in order to get to the coal deep inside the earth, deep shafts are built which can affect groundwater and surface water.

Try This ~ A Fun Experiment With Coal

It’s always fun to see chemicals at work, so try this easy experiment to see how coal can grow crystals.

First, take your pie plate and add your coal. Using the water bottle, spray the coal until it is wet, but no water is pooling on the pie plate.

Combine the first amount of salt, ammonia and bluing to the jar.

Stir until the salt is completely dissolved. Now carefully pour the mixture over the coals.

Add a bit of water to the now empty jar, stir and add the rest to the coals.

Take the food coloring and add drops all over the coal (you can use different colors, if you like).

Finally, sprinkle the last remaining salt evenly over the coals. Place your experiment in a safe place.

Now being careful not to disturb your newly sprouting crystals, add the water mixture to the bottom of the pie plate and add a few more drops of food coloring to the top of the coals. Now wait…

After several days you will have a beautiful crop of home-grown crystals.

Now that you have learned all about coal and how important it is, go out and impress your friends and family with these fun facts.

They may just believe you are a coal-master with all your super-smarts.