Located in the Western Pacific Ocean, the Celebes Sea covers a space of 280 000 squares kms (110 000 squares miles) of the ocean! This sea flows into the Java Sea through the Makassar Straight. The Celebes Sea is part of a basin in the ocean; the countries that form part of this basin are popular holiday destinations like Malaysia, Philippines and also Indonesia! If you’re not sure what a basin is, it’s the region of land that drains into the sea. 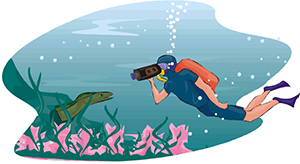 1. Which sea does the Celebes Sea share a border with?

2. What are two activities in the area that improve the economy?

3. What is the deepest depth recorded in the Celebes Sea?

4. How old is the basin that the Celebes Sea is in?

5. Name the two most popular fish found in this part of the ocean