Are you doing a class project on Egyptian archaeology? Has your teacher asked you to find out about the Seven Wonders of the Middle Ages? Or maybe you just love anything to do with graveyards and mummies…

Well, it doesn’t matter why you’re here. What matters is that you’re going to leave here with 10 facts about the Catacombs of Kom el Shoqafa in your pocket. So here we go… 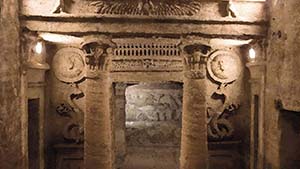 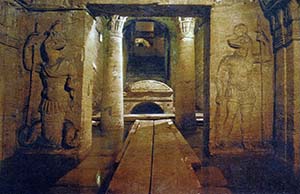 Question: In what century were the catacombs built?
Answer: 2nd

Question: What does the name Kom el Shoqafa mean in English?
Answer: Mound of Shards.

Question: Who discovered the catacombs in 1900?
Answer: A donkey!

Question: How many sarcophagi have been found inside?
Answer: Three.

Question: Which Roman Emperor has a hall in the dead city named after him?
Answer: Caracalla.