Just mentioning the name, The Bermuda Triangle can make some peeps nervous. Well we’re going to tell you all about the mystery that this place is with cool facts, a few secrets thrown in, some history and also some theories that people believe.

Are there supernatural forces at work here or have stories been blown out of proportion? Get ready to be amazed about this mysterious place on Earth.

Maybe science will give us all the answers we need and maybe the Bermuda Triangle is no different from anywhere else in the ocean. Read what we’ve got to say and decide for yourself! 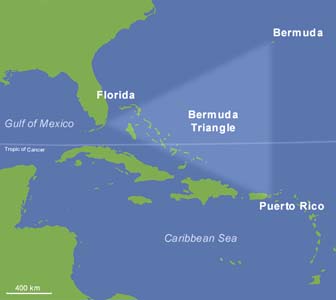 So where is this mysterious place? Well it’s actually in the Atlantic Ocean and the Bermuda Triangle lies between Bermuda, Puerto Rico and Florida.

However, most of the investigations that have been done around the Bermuda Triangle show that they have most likely been because of bad weather or human error.

Even though it’s not got a great reputation, and scares the life out of some people it’s a regularly sailed shipping lane, with cruise ships and other boats sailing through it happily on a regular basis.

There are claims, which aren’t verified, which give supernatural explanations for Bermuda Triangle incidents. These have involved references to UFO’s and even the legendary lost continent of Atlantis. Wow! Who knows what’s going on there!

What are some of the famous Incidents reported?

The USS Cyclops and its crew of 309 went missing after leaving Barbados in 1918.

The TBM Avenger bombers went missing in 1945 during a training flight over the Atlantic called Flight 19.

A Douglas DC-3 aircraft containing 32 people went missing in 1958, no trace of the aircraft was ever found.

A yacht was found in 1955 that had survived three hurricanes but all its crew were missing. 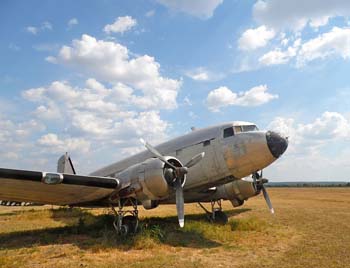 What Happened to Flight 19?

Flight 19, which we spoke about above, was one of the most famous disappearances around the Bermuda Triangle. On December 5, 1945, five US Navy Avenger bombers mysteriously vanished while they were on a routine training mission.

The flight was led by Lieutenant Charles Taylor, who kept in contact on the radio until nobody could hear anything. The rescue plane that was sent out to look for them never made it back either. Six aircrafts and 27 men disappeared without a trace, or so it seems. Did Flight 19 simply crash into the Atlantic Ocean or did something more mysterious happen? And where did the rescue plane go? Hmmmm, lots of things to think about here!

What Happened Aboard the Marie Celeste?

Some people believe the Bermuda Triangle is further than the area of Bermuda, Miami and San Juan. If this is true then there’s another interesting disappearance. The Marie Celeste left New York Harbour on November 5, 1872 with a cargo of industrial alcohol. Passengers on board were Captain Benjamin Spooner Briggs, his wife and their two year-old daughter and eight crew members.

On December 5th of that year, another ship found the Marie Celeste just drifting along in the Atlantic Ocean. All the passengers and one lifeboat were missing. The cargo and personal belongings were still on the ship. You could see that the boat had been abandoned quickly. Why the Marie Celeste was abandoned is a mystery.

So, with all this information on the Bermuda Triangle, what do you think? Do you think it’s down to the weather or human error or do you think there’s something rather strange going on there?