There is a combination of both freshwater and marine species that call the Baltic Sea their home. Freshwater species include pike, roach, perch, and whitefish. Marine fish include herring, cod, hake, plaice, sculpin, shorthorn, stickleback, flounder and turbot.

Other species that have been spotted in the Baltic include white-coloured porpoises, minke whales, beluga whales, beaked whales, orcas and bottlenose dolphins.

The Baltic Sea acts as the main trade route for exporting petroleum from Russia. Although, this does pose a significant concern about oil leaks by other nations.

The Baltic is also home to the Great Belt Bridge and the Øresund Bridge-Tunnel which link Sweden and Denmark, providing a railroad and highway between the two nations as well as an undersea tunnel allowing for large ships to navigate in and out of the Baltic easily. There are also many ferries for cargo and passengers across the sea making transport easy between countries. 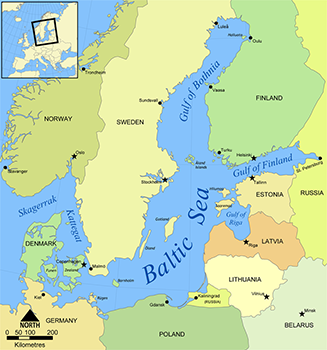