The bald eagle is found in North America and lives in areas in Canada, the United States (including Alaska) and Mexico. It is the only eagle that is native to these areas and found nowhere else and is the national bird of the United States. Historically, the word ‘bald’ at one time, meant ‘white’ as opposed to how we use it today to mean ‘no hair’. 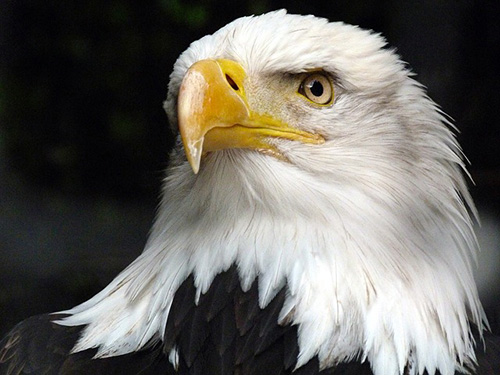 What do bald eagles eat?

Some bald eagles will even eat frogs and reptiles, including snakes. Bigger eagles, such as the Golden Eagle will eat larger animals such as antelope and sheep. Since Golden Eagles are not close to water, they generally are not seen eating fish or water animals.

Eagles are considered predators but they prey based on their environment and where they live. Most eagles will eat around a pound of food each day but they do not always eat on a daily basis. Eagles that live in areas where food is scarce will eat as much as they can and then they can go a few days before eating. An eagle can usually hold around 2 pounds of food in their stomach even though it is very small, only the size of a walnut. 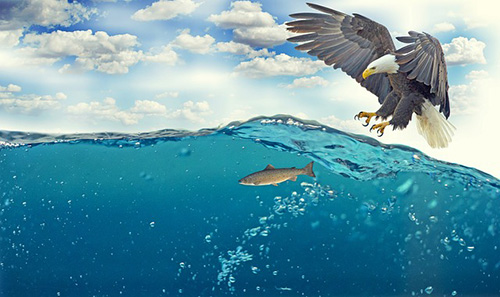 Why is the bald eagle endangered?

The bald eagle were considered endangered species until 2007 because of many reasons. Some of the reasons include that their habitats are destroyed, being illegally hunted and contamination of their food sources.

In August of 2007, the Bald Eagle was taken off of the endangered species list because their population had increased significantly and this made them no longer endangered.

Since Bald eagles live near lakes, rivers and other water places, they have had to deal with things such as habitats being destroyed and their food becoming contaminated. When forest and trees are taken down, the eagles do not have a base where they can perch and build their nests. In the winter, they need to have tall trees so that they are able to hunt the food below by sitting up high in the tree.

Bald eagles that do not live close to trees would sometimes live on cliffs. This would make them susceptible to being hunted because they could easily be spotted by hunters. 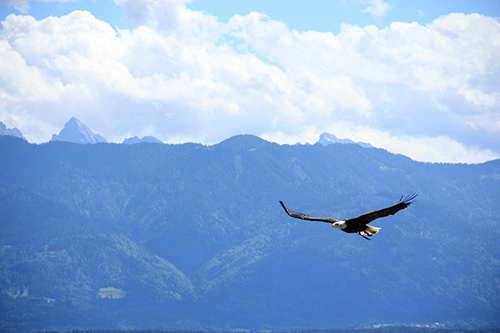 Why are bald eagles called bald?

Bald Eagles are called Bald because it comes from an old English word called “piebald,” which means “white headed,” and not bald. Many people question why a bald eagle is called bald when it is clear that they have white feathers on their head and that they are not hairless.

A Bald eagle is mostly brown and has a white tail and a white head. Their name comes from four words that are Greek root words: hali, which means salt, aeetus which means eagle, leuco which means white and cephalis which means head. If you put all of the words together it says that the Bald Eagle is a white headed sea eagle. This is the only bird that is a sea eagle that is native to North America. 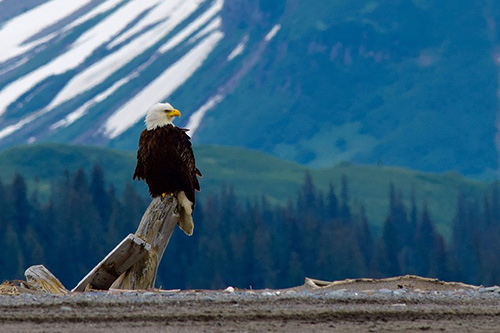 Why is the bald eagle an American symbol?

Even though there might not be any true explanation as to why the Bald Eagle is such an important symbol, my guess is that the Eagle is such an amazing and magnificent bird. When the Bald Eagle is flying, it flies high into the air and will soar on the currents of air. It can reach up to 75 miles per hour when it flies and then take a dive in a matter of seconds.
The Bald Eagle is a wonder to watch and is very beautiful to look at. This bird is a national bird and can be found in North America and in Canada. Not only is the Eagle beautiful, it also represents freedom and solidarity.

Some people say that the Bald Eagle was chosen because when the Revolution happened, the noise woke up the eagles and they flew and circled around the men that were fighting while the shrieked. Some even say that the patriots said, “they are shrieking for freedom.” 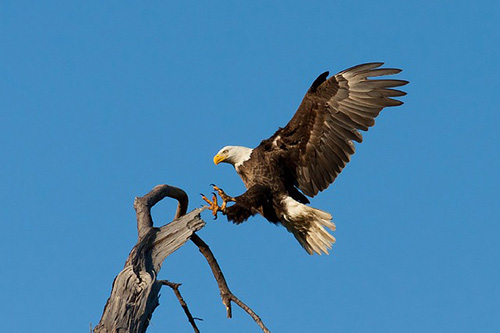 Why is the bald eagle so important?

The Bald Eagle is an important part of nature and has freedom that is limitless based on their quick flying skills and their hunting skills. The Bald Eagle has talons that help it to hunt and help it to keep the small critter population from getting out of hand. They are impressive birds that are fun to look at and are symbolic because they have a lot of power and strength. 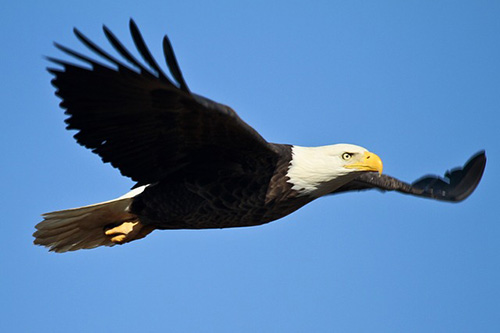 Is the bald eagle dangerous?

Like any wild animal, the Bald Eagle could be dangerous in a situation where it would have to defend itself. Since the Bald Eagle is very strong and has very sharp talons, it could easily hurt someone if they were to mess with the bird in any manner.

Bald Eagles are very protective of their nests and their homes and they do not like intruders. When an intruder threatens them, they will fight back and the result would not be pretty. 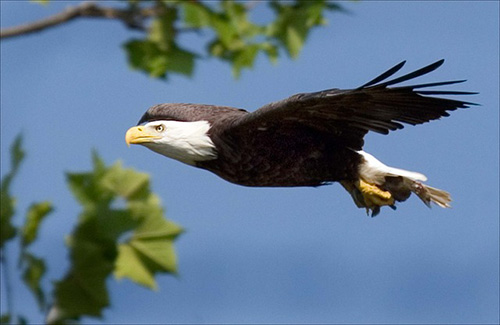 Bald eagles are protected under three acts; the Bald and Golden Eagle Protection Act, the Migratory Bird Treaty Act and the Lacey Act. 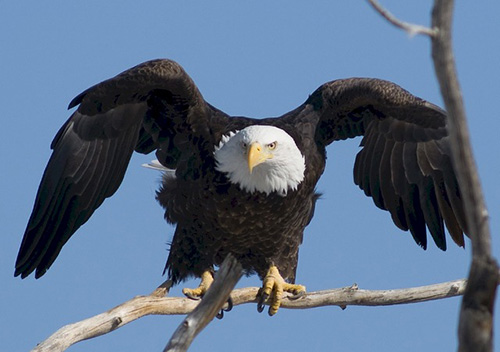 Bald Eagles are known for their amazing flying abilities, but they also are skilled at swimming. A Bald Eagle that is in the water can use their body to bob up and down through the water and they can use their wings to stroke the water so that they can move faster and reach further distances.

Even though Bald Eagles are good at swimming, they have a harder time maneuvering in the water than they do in the air and so they usually will fly out of the water after they catch a fish.
Eagles have strong chest muscles but it is not easy for them to do the flying motion in the water like it is for them to do it in the air. If an eagle comes up from the water without a fish, chances are that it dropped the fish and wasn’t able to hang on to it. 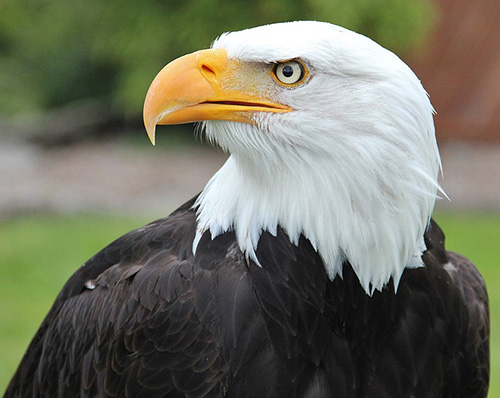 How do bald eagles hunt?

Eagles like to use their sharp claws, or their talons to kill their food. They have four talons total and they are very sharp. Three of the talons face the front and one talon is in the back.

Since the eagle is so strong and their talons are so sharp, they can use their leg muscles to crush their prey. Some believe that the talons of an eagle are so strong that they can crush up to 400 pounds per square inch for each of their talons.

The eagle will then eat their prey and one of the most important parts of their prey that they eat are the bones. The bones of the prey are full of vitamins and minerals and they are very useful for the eagle. These nutritional bones help to give the eagle energy that they need to fly and to hunt. The digestive system of the bald eagle is so strong that the bones will digest and dissolve. 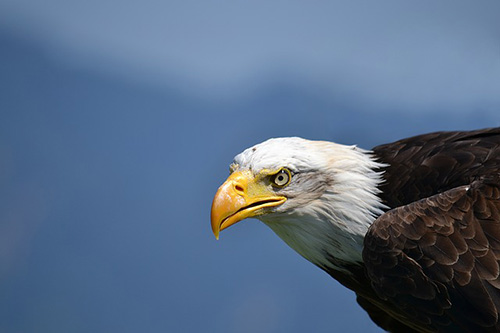 How does a bald eagle sleep?

Bald Eagles sleep at their nest or on the branches of trees, especially when it is time for them to breed. A Bald Eagles body allows them to lock their foot into a certain position so that they can sleep without having to move their bodies or to lay down.

Some Bald Eagles are nocturnal but most of them will sleep during the night and wake up when the sun comes up. They will almost immediately go to sleep when the sun goes down. 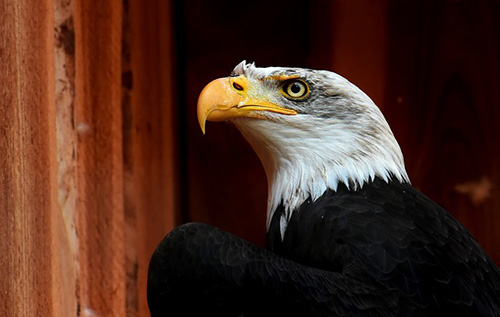 How long do bald eagles live?

The average lifespan of the Bald Eagle in the wild is around 20 years of age. Depending on the habitat, many Bald Eagles can live to be around 30 years or older. The oldest recorded living Bald Eagle is only 29 but this is a low record because most birds can live longer than that.

Bald Eagles that live in zoos or conservatories can live longer because they have more access to prey and do not have to deal with the weathering and environmental issues. One Eagle was reported to live over 50 years in a New York zoo.

Some things that can cause Bald Eagles to have a shorter lifespan are diseases, getting shot, getting stuck in wires or hit by vehicles or eating food that has been poisoned. 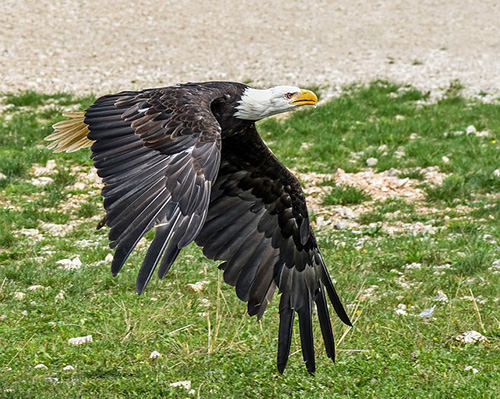 How long do bald eagles live with their parents?

Bald Eagles will usually live with their parents until they are 10-12 weeks of age. When this happens, the Bald Eagle will usually hop from nest to nest for a couple of months before it completely leaves the nest.

Before the baby Bald Eagle fledges or begins to fly from the nest, they will exercise their wings so that they can get stronger. They will also hold on the nest with their talons while they flap their wings. If the chick falls down or can’t make it to the other branch, the chick will probably die.

When they have strong muscles and wings, they are ready to leave. The eaglet will fledge or try to fly and the parents will stop bringing them so much food. They will do this so that the eaglet will prepare to learn to leave the nest.

Most male eaglets will fledge at 78 days old while the female will fledge at 82 days old.
Eaglets that begin to fledge usually have a few crashes and will usually be very clumsy at first. Eaglets that are immature will stay close to the nest after they fledge to come back to the nest to get food from their parents. The stronger their instincts are and the older they get, the more they have the desire to move on. 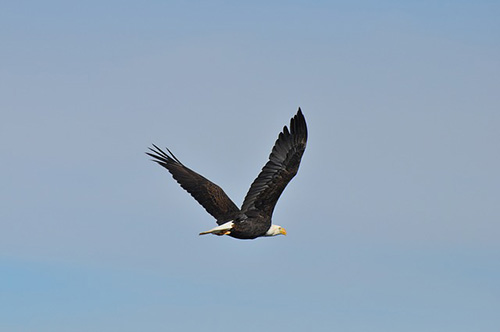 What habitat do bald eagles live in?

The Bald Eagle can live in any type of wetland and is often found in many different kinds of American wetlands. They also like to habitat where there are large bodies of water such as close to rivers, lakes, seas or marshes. This gives the eagle a chance to be able to hunt for food in the water, such as fish, which is their primary food source.

It is important for the Bald Eagle to live where there are trees so that they can perch and build nests. These large trees have to be tall and have open structure and it is important that they are close to water. They are sometimes found close to swamps that have standing water. 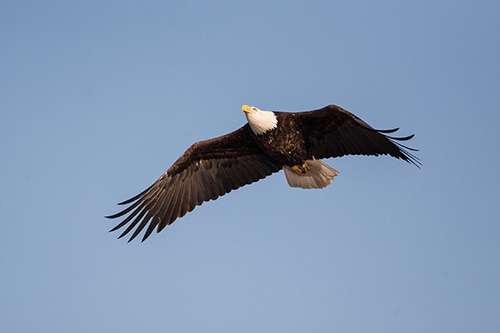 When do bald eagles lay eggs?

Some Bald Eagles will lay their eggs in February and March such as Bald Eagles from Minnesota. Once a Bald Eagle female is pregnant, it will only take her around 10 days to lay her eggs. The eggs will usually be around 3 inches long and 2 inches wide and will weigh around 4 ounces. They will be off white and they usually lay around 1-4 eggs at a time.

When a female Bald Eagle lays her eggs, she lays one egg every one or two days. It will take between 40-45 days before the baby bald eagle to start cracking through the egg. The eggs usually hatch in the order that they are laid. 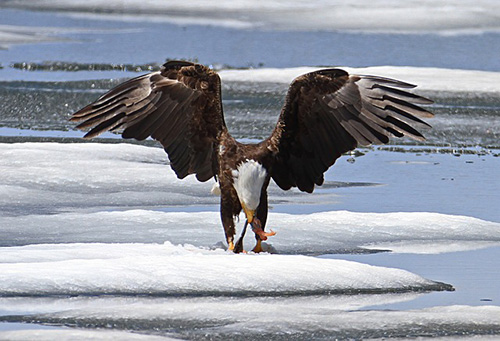 When do bald eagles get whiteheads?

When a baby eagle is born, it is usually featherless and it develops its feathers as it grows. Most of the time they are dark colored or shades of brown. A juvenile eagle is dark brown except under their wings are white.

An old Bald Eagle will still have some white feathers but most of them are brown.